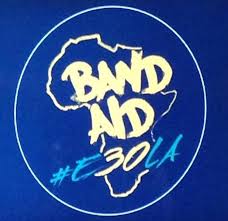 (This is an excerpt from my book, the 2005 Walk On updated version. As today's pop stars gather to record the 30th Anniversary Band Aid single Bono is the only survivor from 1984. His line, "Tonight, thank God it's them instead of you" has however not survived! My excerpt looks at Bono's invoilvement, that controversial line, Geldof and the impact of the whole Band Aid phenomenon)

It was the month that Band Aid 20’s version of ‘Do They Know It’s Christmas’ was released. Twenty years after the charity phenomenon that was Band Aid the stars of 2004 gathered to set aside egos and try to make sure that by everybody achieving the Christmas number 1 on the one piece of CD that millions of lives would be saved in the famine and war zones across the world. Once again it was quite a menagerie of high flying chart makers. Robbie Williams, Coldplay’s Chris Martin, Dido, Ms Dynamite, Dizzee Rascal, Keane’s Tom Chaplin, Joss Stone, Busted and the Sugarbabes all the darlings of British pop share lines and even more are dragged in for the soaring anthemic chorus “Feed the world.”

Some of the entourage were not even born when the song was first recorded, Joss Stone even admitting that she had never heard of the instigator of it all Sir Bob Geldof. Only one of the class of ‘84 was still at the microphone two decades later. It is a symbol of the unprecedented staying power of U2 that Bono was back to re-record “that line.” In the documentaries that would surround the release of Band Aid 20 Bono would speak of his discomfort with the “God” line of the song. “Tonight thank God, it’s them instead of you” jars with its callous selfishness. It comes across as a little unseemly on a charity record. Bono’s hesitancy is understandable.

Yet, it is the most provocatively prophetic line in the entire song. It packs the punch. Here we are in the comfortable, decadent west and instead of being embarrassed about it we are just glad that it is not us who are dying of extreme disease ridden famine on our television news. This line asks serious questions of even the grace that many Christians say before meals. There is a bland disregard for the disturbing conclusion of a prayer that thanks God for supplying all our needs if there are 40,000 children a day dying from hunger. Are we suggesting that God is withholding from some? Or could it be that the grace prayer should be recognised as much more universal. God has supplied our needs and it is in us withholding and hording that leaves African children without the Lord’s ample supply. This line certainly throws all kinds of messy questions and demands responses. A rich rock singer having to sing it may have left Bono uneasy but charity should never be about easy thoughtless solutions.

For Bono, Bob Geldof the co-writer of the song and impresario of the Band Aid charity which would eventually lead to Live Aid had “changed my life, ruined it if I think about it, it sent me off on this incredible adventure.” The two have in recent years become partners in campaigning to world leaders and went together to meet the Pope. Bono credits Geldof for teaching him the importance of “being focused, angry, persistent.” He would also see himself as the diplomat of the two. Geldof wades in with voices raised in expletives. Of Bono, Geldof says, “He’s charming, he’s persuasive, and the politicians can go home to their daughters and say; ‘I had a meeting with Bono today.’”

Geldof has always insisted that he is an atheist. When they visited the Pope Geldof asked if the Pontiff knew of his unbelief. Bono would turn to his fellow Dubliner and tell him he was as close to God as anyone he knew. Geldof is indeed a scruffy bundle of contradictions. When the Pope gave the two rock stars a set of Rosary beads each the atheist asked for an extra set! He is foul mouthed and does not stand on ceremony but has been a recent defender of the institution of marriage. He is a melancholic soul rarely recognising any joy within his life and yet he is a man who has brought a great deal of hope to millions of people and love to his four daughters. His actions literally did change people’s lives. Before the new generation of pop stars recorded the Band Aid single they were introduced to a young woman who was a dying child in some of the 1984 Ethiopian famine footage. She was now an agriculture graduate. Bob Geldof saved her life.

Songs For A Healthy Soul - One by U2 (on the week of Bono's birthday!)

If ever a song grew up, it is One. On Achtung Baby it was maybe the song that most recalled the 80’s and the Joshua Tree that Bono said they were chopping down but over the years it has become U2’s best loved, most covered and the glue that sticks a lot of what they do together; it is uniting, it makes everything into One! Perhaps on closer more meticulous inspection we shouldn’t be so surprised as One is a song richly layered, ambiguous but with a plethora of meanings, all of which when given the chance gives more solidity and force to the song. It has unity at the soul of it. Unity of emotions and unity of people.

In its uniting of emotion it holds the beauty and ugliness of love side by side; the melancholy of it and its lovely hopefulness. U2 have always made it clear that it is not about the old hippy let us love each other philosophy but that it is much stronger and more realistic than that. Here are two people who have hurt each other, who need to forgive, who need to be Jesus to each other in the unconditioned healing he brought to people and relationships. This is a song about two lovers who should be turning their backs on each other, walking away without ever looking around yet they see that in the midst of their romantic angst they can make a decision to carry each other. It is a unity that eyeballs the differences and makes courageous, painful decisions to help. The Edge was in the middle of a marriage break up during Achtung Baby and it is hard to believe that this is not about him and his first wife Aislinn.

In time One came to mean so much more, taking on the political and economic divisions on a global scale. Bono mentions that the Dalai Lama had asked for a contribution to his Oneness project and how he’d not followed the easy hippy cliché chorus but had responded, “We are one, but we are not the same.”  By the time the song had reached Live 8 and the Vertigo Tour it was not so much dressing the stage set as the rest of the stage set was dressed upon it. With the Vertigo Tour’s intro being the haunting repeat of the word “Everyone” and its sense of unity from beginning to end, particularly on this occasion with the west and Africa, One was fully grown, had come of age and was more than deserving of its accolade in Q magazine as being named the greatest song of all time.

Other U2 articles on Soul Surmise