THE WATERBOYS - Living In A Strange Boat

THE WATERBOYS - THE MAGNIFICENT SEVEN 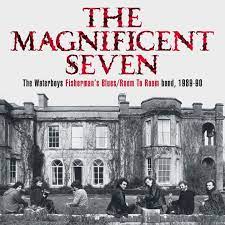 There was something about The Waterboys 4 year sojourn in Ireland from 1986 to 1990 that was not only unique to that particular band but also in the history of rock music, maybe any kind of music.

The release of The Magnificent Seven box set that covers just a couple of years of this has over 80 unreleased tracks. They don’t include the 17 tracks already on the extra CD of the 2008 re-release of Room To Roam. Add to this the almost 120 extra tracks on the Fisherman’s Blues box set of 2013 and even more on the first re-release of that record in 2006. And… there was the Fisherman’s Blues Sessions record Too Close To Heaven in 2001. Wow!

When Mike Scott suggests in the coffee table sized accompanying book to The Magnificent Seven that this band played everywhere, on stage, back stage, in bars, in hotels, on buses and planes, as well as in the studio he doesn’t seem to have been joking. There was something in the West Of Ireland muse; magic, mystery and musical menace.

My fandom was right bang bang in the middle of this imaginative journey. As a fan of their albums Pagan Place and This Is The Sea I loved it when they added Steve Wickham’s fiddle. On April 6th 1986 I might have actually witnessed this Irish journey hit the accelerator when The Waterboys played the Ulster Hall. The blend of Irish folk and rock. The energy. The fun. The imaginative blend and blur.

I saw them 5 times in the next three years, the only band that I have bought tickets for 2 nights in a row - Belfast’s Ulster Hall and Derry’s Rialto.

By the time the journey got to the release of Room To Roam I wasn’t quite as convinced. I thought, at the time, that it had veered too trad. The pendulum at swung too far from the 1986 paradise.

I revisited my critique with the 2 CD Remastered release in 2008 and I have to say that I have revelled in this sprawling box set of live, demos and out takes. It is exhilarating listening. You feel the joy that these musicians were obviously having making it.

We get pure unadulterated trad. Sharon Shannon’s star rises throughout. We are gifted fascinating blend of ‘big music’ and ‘celtic trad’ that has its paradigm fulfilment in A Pagan Place with reels. There is a lovely dovetailing of This Is The Sea and Dylan’s New Morning. A few more Dylan covers and even a Yellow Submarine.

It’s quite the treasure trove. The book adds to the wonder as alongside credits, tour dates and photographs Mike Scott shares the what, why, how and who of the whole glorious adventure. A few years in Waterboys’ time wonderfully captured.

Posted at 09:16 PM in ALBUM REVIEWS, THE WATERBOYS - Living In A Strange Boat | Permalink | Comments (0)