WHY THE WORLD CUP NO LONGER WINS 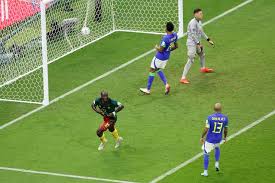 So there have been some good matches, dramatic come backs and quite a few surprises. Yet, we are almost two weeks into the 2022 World Cup, the group games are over and I haven’t seen a match the entire way through. Oh I have sat through a few but fallen asleep every time.

They say that it is a World Cup to boycott. I can see why. I am uneasy about that. It is a World Cup being played in Advent. The first and I would suggest the last. Advent reminds us of God’s grace moving in among us - no boycotts! “God demonstrated his love for us in this, that while we are still sinners Christ died for us”. So, I am asking, are we better sinners, more politically correct sinners, than the Qataries?

Thirty years ago the World Cup was the biggest soccer thing. It was the big world one. It was the pinnacle. The peak for any footballer. The best teams at the best event. You fixed summer calendars around matches. Holidays were moved to let it fit.

Not anymore. In the last three decades everything has changed. In 2022 the English Premiership, the Champions League are all way above the World Cup in quality and competitiveness. The top clubs are a combination of the best players from every country in the world. So, Manchester City, Liverpool, Bayern Munich, Real Madrid and Paris St Germain are now all better teams than the country who will win the World Cup, teams and certainly squads who have players that might never make the European elite.

As a result, the World Cup and the European Championships has become a lovely summer filler between club seasons.

I do not want to have the season broken up for World Cups. I am missing the Premier League. I would rather be watching West Ham and Newcastle on Sunday, than England and Senegal. Oh I know it helps to not have your team there but still.

And then there is missing the excitement of Fantasy League.

More than anyone else I am sure that Arsenal fans did not want this World Cup. They were on a roll and City were beginning to struggle a little. They could have been even more than five points clear by New Year. Now they have to get back to it after a break.

That will maybe be the most interesting thing about this World Cup. Not who wins it but those who might lose or gain by it afterwards. A season cut in half means there will be a second pre season. It will only last a few days. Teams will need to get their rhythm back, get up to speed. It’ll happen at different speeds across the different teams. It will make this a season of two halves. Surely that will have an impact.

Now, all I need is for City players to get knocked out quickly. There are more important things to win this year than a damaged World Cup!

The response to this blog was interesting. Mark thought Manchester United players were soaring - maybe they got something to play for at last! (Harsh)... Roberta says she loves the World Cup and the excitement is building. Maybe it's me and I am subconsciously there but not wanting to be. Naomi's was the best push back. Other countries leagues have to break for summer World Cups why not European teams for one. My white, entitled, prejudice slips through. Naomi you are right! 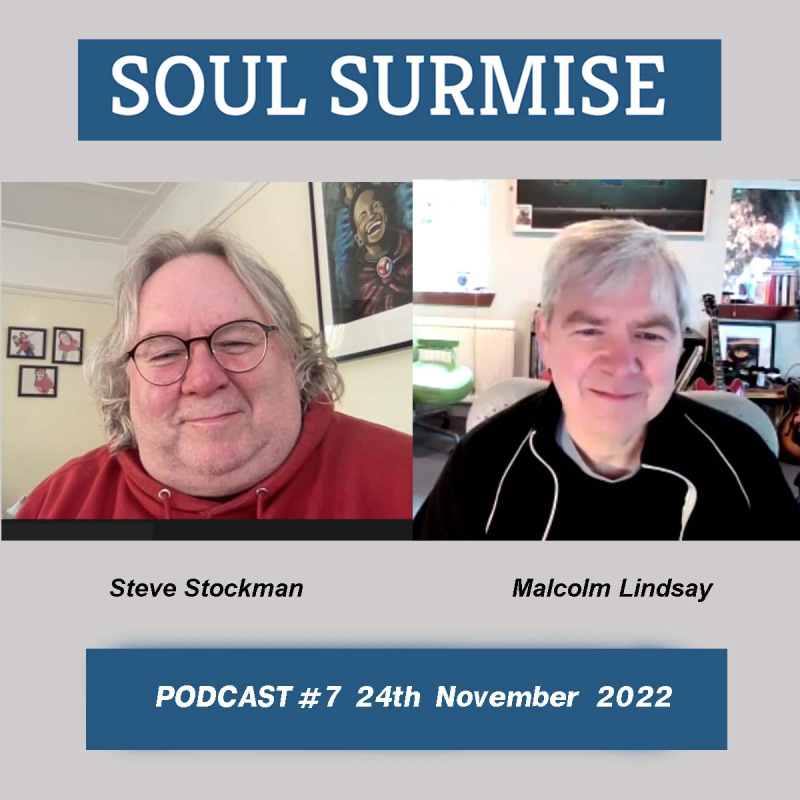 The Soul Surmise Podcast #7 has me chatting to musician, writer, arranger and producer Malcolm Lindsay particularly his new collaboration with PJ Moore, formerly Blue Nile, called PJ & Co. With their record When A Good Day Comes certain to be high on my Albums of 2022 I wanted to chat about how this project came together.

Yet, it was more than that... we talked about Malcolm's varied career from the early days of Deacon Blue, through writing for orchestras, soundtracks to films, working with David Byrne and producing the likes of Willard Grant Conspiracy... much of which he stumbled into. It is quite the story. In this episode of the Soul Surmise Podcast I have the privilege of a yarn with Ricky Ross, broadcaster, author and of course lead singer of Deacon Blue.

I take the opportunity to ask Ricky about his new memoir Walking Back Home and the how he writes about Deacon Blue, family and faith. We move on to his new solo album Short Stories Vol 2 and finish up getting excited about his Irish dates later in the month, in Cork, Dublin and Belfast. In Belfast he will be playing Fitzroy, singing from the same space where I preach on a Sunday!

GET TICKETS FOR THE BELFAST GIG HERE Northern Ireland author Tony Macauley didn't write his first book until he was in his 40s. He has now 4 memoirs and a novel in the bag and two of those memoirs Paperboy and Breadboy have been turned into musicals.

As Tony re-publishes his fourth memoir The Little House On The Peace Line I took the excuse to chat to him about his writing life and why he felt that new was the right time to re-publish...

THE LITTLE HOUSE ON THE PEACE LINE 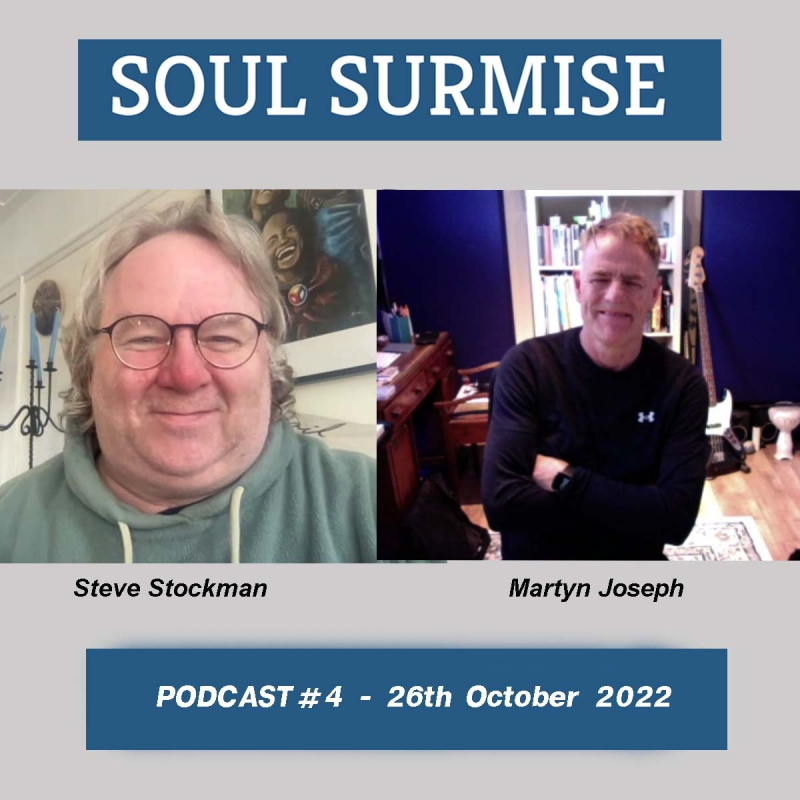 A Soul Surmise Podcast in which I chat to my good mate, the Welsh singer songwriter, Martyn Joseph.

Knowing Martyn for 30 years I was keen to talk to him about stage craft. Martyn can do up to 200 gigs a year and was just back from the west coast of North America when we spoke. Over the years I have chatted too him about the live show, watched him eagerly seek ways to do it better and more importantly watched him grip a crowd.

So, how does a gig come together and how might it change mid show?

Secondly, I wanted to chat about 1960, Martyn's most recent and maybe best record ever when he trails through his life and in the subjectivity of his life touches all of our lives.

Listen to the podcast here:

You can buy tickets for Martyn Joseph's concert in Belfast HERE The second in our brand new Soul Surmise Podcast is a St Patrick's Day Special.

It is the first of two podcasts where I talk to Brian Houston. Part 2 will be released when he releases his new eponymous record soon.

This is Part 1 where I talk to him about his album Anam Cara released this week.

Anam Cara is an album steeped in Celtic Spirituality with Uilleann Pipes and the Irish Language. In the podcast I take Brian on a journey from the loyalist Braniel housing estate to a Cree Indian Reservation and back to a new passion for all things Irish. It is quite the story for St. Patrick's.

And if that is not enough we get two live songs - exclusive versions of Óró sé bheatha abhail and Uisce Beatha (Water of Life).

You can find the Soul Surmise Podcast on:

MY REVIEW OF ANAM CARA HERE

THE SOUL SURMISE PODCAST #1 - How Do We Help Ukraine? With Norman McKinley MBE 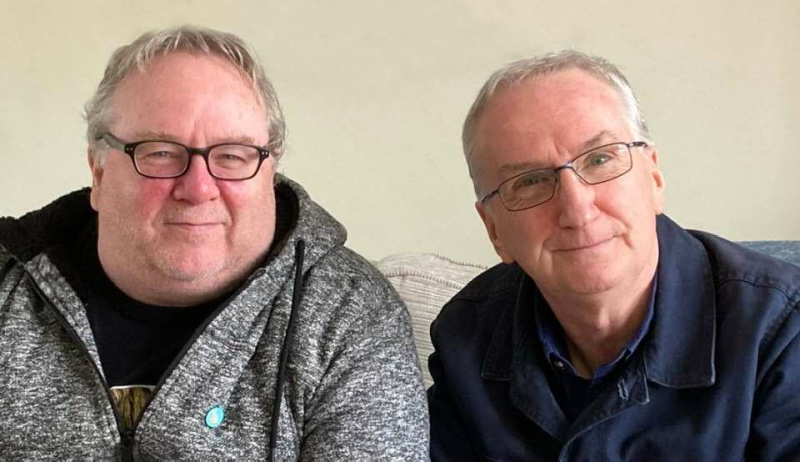 The first Soul Surmise Podcast is now available on iTunes and Spotify.

It is an emergency podcast in some senses. I was intending to have Norman McKinley as our guest later in the series but the war in Ukraine, people's generosity to help and Norman's experience at what might be the best way to help and pray is so good that we rushed this one out.

Norman McKinley received an MBE in the New Years Honours List just as he was retiring from his role as Executive Director of UK Operations at British Red Cross.

I was interested to know what happens in such organisations at times of crisis? How do they mobilise? What is the best ways for churches and individuals to help? Cash or things? How do we pray?