Home Archives Profile Subscribe
JASON ISBELL live at THE OLYMPIA THEATRE, DUBLIN - 19.11.22
QATAR WORLD CUP - WE WANT TO SEE IT BUT NOT LOOK 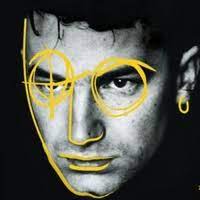 I am sitting in the Upper Circle of the Olympia Theatre. My mate Paul and I are waiting in anticipation. BUT… we don’t know quite what we are anticipating.

We’ve been scrutinising the lay out. A cello… a harp… a keyboard with various add ons. Then a table and chairs on one side… and a smaller table on the other. Just before showtime a Guinness type drink is set on that smaller one. What’s it all for?

Even when Bono walks out onto the stage to rapturous home town applause, what is he going to do?

It is Bono however, and since I first saw him live in The Maysfield Leisure Centre forty years ago next month he has been a charismatic performer who knows how to hold a crowd. Still, as he called it, it was “slightly transgressive” to be on stage without the other three. New anticipation.

We entered was a gripping mix of theatre, art, memoir, confession, comedy and of course song. Well, not “of course” song. Actually it was mainly a theatrical performance involving all those other things. It has to have been influenced by Springsteen on Broadway but though Bruce is good, Bono bosses him in the acting. He mimics Pavorotti, Paul McGuinness and his da. There’s a lot of laughter.

I was told as a child to use the whole stage. Bono did just that. Opening the memoir to tell us how the band got together and broke up and got together again around one table, a high tech move of the chairs to introduce his fellow band members he took us to their first rehearsal space with Bono’s mother buried just 100 yards away as these musical innocents fought to birth I Will Follow.

That queued a performance I Will Follow in a set list of 13 songs scattered throughout the show. We get Out Of Control, Vertigo, Pride, Beautiful Day and Desire. In the latter Bono does his best Elvis. Can I add that his movement for a 62 year old, climbing on tables as well as the dance moves, was impressive!

Bono’s voice. Oh my his voice… and then I stopped and realised that it is Bono. This is one of the biggest rock voices in the world. Yet, stripped of all the sound, just gently accompanied by Irish musicians Kate Ellis on cello, Gemma Doherty on harp and keys and voice all orchestrated by Jacknife Lee, it sounds even better.

For Sunday Bloody Sunday Bono tells us that after Boy that looked inward and October that looked to the heavens, Edge started to look out asking if rock music could make a contribution to changing the world. He defined it as “religious art meeting the Clash” and as he was on honeymoon in Jamaica at the time Edge was writing it he still hears Bob Marley when they sing it.

That "religious art" reference is as the spiritual is throughout. Talking of the Shalom Fellowship and needed a better signal to God for their prayers as to whether to continue as a band. The sense that they God could use their band to change things. The St. Francis is Assisi idea "share the Gospel and if you have to use words." Bono's Christian faith is not so much scattered throughout as enveloping the entire deal.

The anticipation was the book. Would he just read from it with a little more drama or what. Well this was a little more than is in the book, at least to as far as I have read. The little skits with his dad in Finnegan’s pub in Dalkey where they’d meet every Sunday became the main thread in this storyline. “Anything strange or startling..” Bob would lead off.

My book review (still to come) will be titled A Girl, God and Rock N Roll. Even tonight Bono concluded by speaking about how he was born with his fists clenched and has been saved but is still fighting to better relationships with his wife Ali, the band and his Creator.

This performance though seemed to be more about the trauma that Bono brought to those three mainstay relationships. The death of his mother who he elaborated was not just dead but “we disappeared her” by never speaking of her again.

Then also his dad Bob. Their relationship of weekly silences in the pub, not uncommon to Irish sons, was another haunting. Bono wanted to please him. It was hard work though there were a few exceptions; taking him to meet Pavorotti, his dad ’s vocal hero, and finding in the same place the charm of Lady Diana, with his dad’s hatred of British monarchy, whose hand shake Bono declares “took away 800 years of Irish oppression in a second!”

We might say, even with a look at Bono’s other bands, the campaigns One and Red, that we only got 20 years in with 20 years left to go when Bono closed the night.

He’s back in the Sorrento snug in Finnegan’s. He surmises that his dad left him his voice. He can now sing tenor, his dad always lambasting him as a baritone. He thinks of a song that his dad left as a ghost to him, Torna A Surriento, and realises that it is even where the Sorrento snug gets its name and he sings it… unaccompanied, filling a hushed Olympia with something beyond our anticipation.

I left thinking that perhaps Bono’s relationships with Ali, the band and God are all the easier for him having found forgiveness, as Bono suggests it might be, with his dad and through that to his mum.

As we left I overheard Glen Hansard saying that he “was blown away.” Indeed. Astounding.