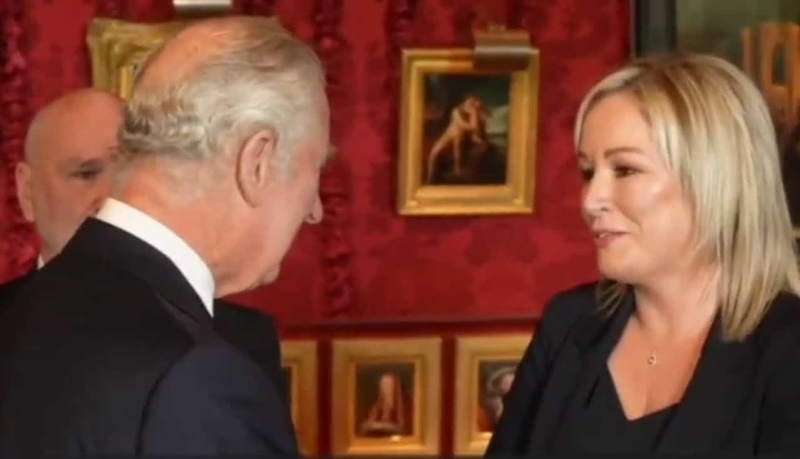 The mixed up confusion of the Irish story opened another chapter this week when the new King Charles III visited as the country mourned his mother Queen Elizabeth II.

It is agreed in most quarters that Sinn Fein played a public relations blinder. Using all their intentional charm Michelle O’Neill and Alex Maskey came across as King Charles’ new best friends, laughing and joking even at Jeffrey Donaldson’s expense as Jeffrey waited patiently to shake hands of a King he is supposed to be the loyal subject of.

Looking at the colder, more dutiful perhaps, engagements between Unionists and Royalty, there was a sense that Unionism is so out of step with 2022.

Since Queen Elizabeth’s prophetic visit to Dublin in 2011, there have been many more symbolic gestures where the Royals have given clear indication of their desire for reconciliation in Ireland. This is a seismic statement of forgiveness in spite of the deep pain that they experienced with the loss of their beloved Lord Mountbatten.

This is an intentional forgiveness. This is a hard thing. The Queen herself said, “It is in forgiveness that we feel the power of God’s love.” Forgiveness needs the strength of God too. Such forgiveness is the central truth of the Gospel.

This Royal mission has been visible for over a decade at least and yet what surprises me is that Unionists and Loyalists seem to be completely out of step with it. It is one thing having a wonderful gable wall sized mural of our monarch in a Loyalist area. It is quite another thing to be loyal in following her lead, doing as she does.

That lack of loyalty to the Queen’s agenda is one of the reasons that Unionism seems out of step, out of time. A lack of grace and forgiveness and a continued attitude of ‘us’ and ‘them’ is not where the vast majority of the wider society is at.

If a Border Poll happens, and I am not sure it’ll be soon, then this is where Unionism needs to change. They need to find some of Sinn Fein’s political charm, to find warm engagement with those outside their own cohort that they will need to convince.

Sinn Fein need not cheekily grin and be complacent. There is no question that they did not put a foot wrong during King Charles III's visit and Alex Maskey's generous speech of condolences was a rub your eyes moment of change. Though the charm is noted, and they have reached across more bridges than most Unionists, they have work to do too. I have sat in a University Lecture Theatre and listened to Mary Lou McDonald try to convince Unionists how welcome they will be in a new Ireland and then days later watched her stand by an ‘English Out Of Ireland’ banner. Like murals on walls, actions speak louder than words!

And the big step. Forgiveness? As British Royals reach across the chasm of centuries of killing one another to seek new relationships with genuine gestures of forgiveness can Republicans start forgiving too. There have been more anti British, anti English and anti Colonial moments than Mary Lou’s banner.

Forgiveness and reconciliation are the words that the British Royals, particularly Queen Elizabeth II, have purposely placed into our broken but beautiful place. The best way to honour her legacy would be to be about making her prayers for us all to come true. It might be where both Sinn Fein and Unionists need to find "the power of God's love" to help in any Border Polls!