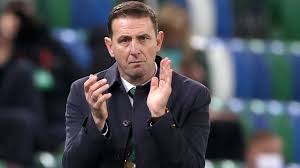 It was predictable that Northern Ireland soccer team manager Ian Baraclough's head would be dangerously close to the chopping block this morning.

It was a dismal display from Northern Ireland  in Greece last night. Bleak.  After a wonderful comeback against Kosovo at Windsor Par, at the weekend, hopes were high but that was as lethargic a performance as I have ever seen from a Northern Ireland in a while. Even our quality players like Stevie Davis and Jonny Evans seemed out of sorts.

BUT wait... before we sack Baraclough let us understand this Nations League thing. Or maybe understand how little we understand it!

This relatively new competition came into the football calendar to give some meaning to friendly matches. If truth be told it was so that in becoming more competitive international games would perhaps gain a bigger TV audience. A competitive match between Northern Ireland and Kosovo might gain more interest than just a friendly. Understood.

What we then need to do is to understand what this does to the development of a team.

The big two international competitions are the World Cup and the Euros. Both of these are played over two years. Just six years ago Northern Ireland reached the Round 16 of the Euros. It was obvious after that tournament that a rebuild was in order.

Now... this is where the Nations League becomes a distraction. In the pre Nations League days there would have been ample friendlies to blood young players, try different formations, developing and blending a team together.

I think that Ian Baraclough has used the Nations League to do that because he had no other friendly options and is feeling the grief from fans because suddenly they haven't just lost a friendly to Greece in a time of transition and experimentation but almost got relegated from a division in a tournament that hasn't really caught anyone's imagination.

So, maybe go easy on Baraclough until the real Euros begin. That is where he should be judged.

I will be honest. It doesn't look good. Players like Saville, McCann and Whyte haven't maybe developed as well as we had hoped. Steven Davis cannot have long left and it is hard to see who fills that gap. Jonny Evans too though defensively we seem stronger. Conor Bradley is surely the brightest light in a while.

It is not Ian Baraclough's fault that Northern Irish parents haven't birthed many great footballers in the last 25 years. It might be that there is someone who can get more out of what we might have or not have than Baraclough. However, to make bad results in the Nations League as a reason for change might be wrong, in my surmising.