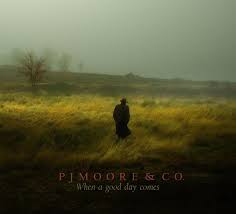 "When a good day comes/Rest and be thankful/for that we’ve got…” and listen to the new collection of songs from PJ Moore & Co from which such a directive comes.

This is a most mature slow burn beauty of a record, light and lush yet somehow at the same time weighty in depth of quality.

The journalists will flock around the PJ Moore part of the story. Moore was one of the three quiet and often elusive Glasgow men who formed Blue Nile in the early 80s and made records with little commercial hype but with massive critical acclaim.

Four records from 1983 to 2004 produced 33 songs and very few live gigs. Yet those albums are timeless and loved in copious amounts more than they sold.

So anything Blue Nile is a gasp of joy from fans like me. Here, 18 years later one of the three is releasing a record. Paul Buchanan’s only solo album is ten years ago and I am not aware of anything by Robert Bell. So, you can understand why the press and us fans would concentrate on the Blue Nile link with this.

And for Blue Nile fans like me you’ll not be disappointed. Moore wasn’t a writer in Blue Nile days but his writing is of the finest quality and the material he works from is right off the rich precious Blue Nile seam.

If the origins of When A Good Day Comes are Paul Joseph’s, then his role as enabler in Blue Nile is taken on here by Malcolm Lindsay. Lindsay was there for the early skirmishes of Deacon Blue but became a composer, arranger and producer. You’ll have heard his work across TV drama and documentaries.

Fortuitously Lindsay moved house and found himself Moore’s neighbour. It would seem that before the musical collaboration that Lindsay was a pastoral encourager gently forcing Moore to follow his muse. Knowing Lindsay and his work you could be sure that what he was hearing in Moore’s studio had to be good or he would not have been egging it on.

The two are a perfect combination and the dreamscape sounds that they have conjured needed a perfect voice singing over the top. If they had asked me I might not have endorsed Mike McKenzie. Yes he was Scottish and yes he won the 2019 BBC Singer Songwriter Award but he was younger, apparently wasn’t aware of Blue Nile’s work!

I am glad they didn’t ask because McKenzie is perfect and with the three units locked in PJ Moore & Co have made an utterly stunning album that’ll help us in the early days after the lockdown experience we have all been through but in 20 years time won’t need us to link it with that pandemic.

The songs here are full of the created order and the weather. I am thinking of where might be a best place to get its full effect. Yes, a candle and glass in the late hours but I am thinking of headphones on the beach as the sun sets. Hypnotic. Meditative. Spiritual. It is drenched in the mood for surmising.

I have an idea. It would be so lovely to hear your voice. Have you ever thought about recording your post so that it could be either read or listened to? I have a friend who does that with her sub stack posts. For those of us who have trouble reading, being able to press play and hear her speak the words she has written out is such a wonderful option.

I know we Americans love your Irish accents… and find great comfort in your words in particular, Steve.

Wishing you love and wellness and a wonderful autumn season.