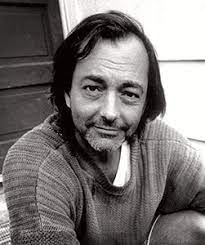 I had had the wonderful privilege of hanging out with Rich Mullins in our home in Dublin, 78 Eaton Wood Green an address that became the title of an instrumental on his album A Liturgy, A Legacy and A Ragamuffin Band. Later there would be times in Windowrock, Arizona and Wichita, Kansas. Finally back here in Ireland at Summer Madness.

He was already a CCM star when I first heard him sing in our front room in Eaton Wood Green. His voice grabbed my attention and then the words of a brand new song:

Wow. I was utterly captivated. A poet in the world of Contemporary Christian Music was rare and Rich rose above them all. Next up he sang Here In America:

And if you listen to my songs I hope you hear the water falling
I hope you feel the oceans crashing on the coast of north New England
I wish I could be there just to see them, two summers past I was
And the Holy King of Israel loves me here in America

Goodness me! I spent the next few years discovering Rich's music and loving those little moments in his company.

When he was killed on a car crash 25 years ago today I was devastated. We had talked about me booking him for Greenbelt and had agreed that we'd leave it for a year. It would never happen.

To make sense of it I wrote Big Moments and still stand by it as a poem.

There are big moments of grace
And times when saints come to touch us
Chance meetings that seem so meant to be
Coincidences far too obvious
And I can hear the water falling
The ocean crash on New England’s shore
The brown brick spine of some dirty brown alley
The shaving that fell on the carpenter’s floor
I can feel the hammer dulcimer move me
That voice proclaim truth and love
Giving me glimpses and clues of this life on earth
And inklings of the promise above
Just a speck upon my time line
That the son caught to make shine bright
Such big, big moments in tiny seconds
Leaving me to follow in your traces of light
How I longed to spend more time with you
Maybe someday that time will come
You left a legacy to think on til then
Thoughts to fill my life and then some
Someone said that you know a saint
By how alive they make you feel
Not by how much they show to you
But by how little they conceal
You left us with broken hearts and souls
Our hope is feebly trying to temper it
We lost so much more than skin and bone
You are the world as best as I remember it.