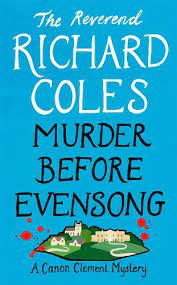 As the summer Facebook pages are clogged up with holiday snaps from all around the world there are some of my friends who have spent their well earned weeks off in those little quaint villages, scattered all over England. Those caressing little streets with beautiful houses, maybe a thatch, a pub, a post office and a more modern cafe to catch the tourist! Some even have the big house, like High Clair where Downton was filmed (sorry Janice, maybe next time!).

It is very idyllic and picture perfect particularly on a sunny day. Step out of your classrooms, offices, shop floors and big city schedules, go back in time a little and chill. Rev Richard Coles has created such a beautiful spot for his new Canon Clement Mystery Series. It is a relaxed summer read.

Coles is the Ed Sheehan of vicars - loved by all! Although he has in fact resigned from the clergy to pursue writing and other things.

Murder Before Evensong is the first in Coles’ new life. He sprinkles all kinds of things across his idyllic village of Champton, on the edge of a big house run by the de Floures, where Canon Daniel Clement is Rector of St. Mary’s.

The sprinkles? Well parish politics is first up. The idea of putting toilets into the Church has split the parish. Then murder. Is it linked to the possibility of toilets and pews being removed! There is nothing new under the sun and if there is - kill!

This opens up the intrigue of the past, everybody’s broken story needing aired in the search for a killer who soon, in best Midsomer Murders’ tradition, kills again.

Canon Clement will rightfully be compared with Grantchester vicars Chambers and Davenport in that TV series or Fr Brown in GK Chesterson’s series of novels. Clement seems a perfect blending of them all.

Champton is full of characters, from aristocracy to gypsies superbly developed by Coles. Canon Clement living with his mother and two dogs fit right in. My only fear is that if the series lasts for 4 books there will not be many still alive!

There are other sprinkles. The Bible is used quite beautifully both for issues like death and murder. It is also applied to lessons for everyday living and solving of mysteries. I love how he uses the prophecies of Isaiah about Jesus as an illustration of how much he has a knowledge of who the murderer is but not quite yet.

I thoroughly enjoyed his pastoral nugget sprinkles; in his own study, other people’s homes and from the pulpit.

There is a comedic thread of course too, which brings comparisons with the Vicar of Dibley. It is not as slap stick as Dibley, more gentle English village as we said at the start of this review.

I don’t think it quite reaches the quality of Richard Osman’s Thursday Murder Club series, to which it will be immediately compared. Or, maybe not yet! The investigation is less intense, at times I wondered if there was an investigation at all.

Yet, for a summer read, particularly if you are of a Church going persuasion, you’ll get a lot of gentle enjoyment out of the life and death of Champton. Bring on the next in the series quickly.