Home Archives Profile Subscribe
BRACE! BRACE! - A PSALM
I THOUGHT I HAD LOST MY MOJO - PHEW - IT IS BACK!

SURMISING THE RESPONSE TO MY TWEET OF MAGEEAN & MUIR 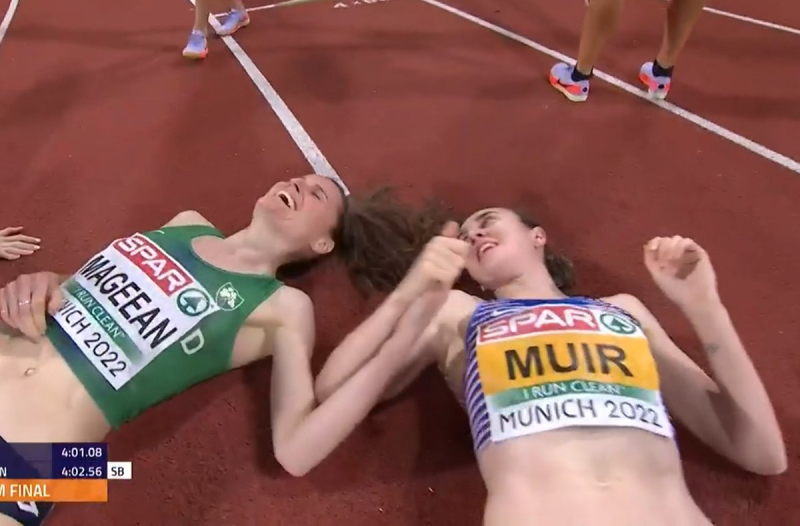 It all happened so quickly. Suddenly the image on my TV was athletes Laura Muir and Ciara Mageean lying on the track exhausted side by side after winning gold and silver in the 1500m at the European Championships. Ciara reaches out and they hold hands in success, friendship and respect.

It was a beautiful photograph of two elite athletes showing friendship and respect after going head to head for a coveted gold medal.

I saw more. The Irish vest alongside a British vest, holding hands in joy and respect. It was an image of togetherness across nations and in this case two nations that have been fighting each other for centuries. An image that suggested how we might respect each other as we continue to seek peace and reconciliation after our most recent Troubles.

I was immediately delighted at how the image resonated with so many friends on Facebook as well as Twitter buddies. Although the vast majority still like my Tweet, within hours it had turned a little confrontational. Be careful what you wish for with Retweets because the more the Retweets and therefore the further out from my own circles my Tweet went the more divisive the opinions.

Now, some of the comments I have understood. Laura Muir is obviously Scottish so many pointed that out. I even think that the Scottish nationalism debate was also being fuelled. Some from here in Ireland took vicious aim with all kinds of opinions, suggesting that I shouldn’t be politicising two athletes and giving me grief in other ways.

It is really the first time I have experienced such thoughtless animosity. I started to understand the abusive use of Twitter. From my light and instant Tweet people who have no idea who I am are lining up with opinions. What is it about us human beings of this generation that need to hurl angst and insults at neighbours who we don't even know.

A lot was being made of, and made up about, a Tweet that though I was intentional in Tweeting was not a deep major statement. “Here’s an image…” I stated. It wasn’t a story or even a blog like this one. It was a quick image. In that image Ciara from Northern Ireland is running for Ireland and Laura from Scotland is running for Great Britain.

The women are not so much my point as the vests. This was a Major Championships where one medaled for Ireland (wasn’t Ciara’s race tactics brilliant) and one medaled for Great Britain and Northern Ireland (what a burst of pace at the bell from Laura).

It was quick. It was simple. But I will not let those who obviously have issues that it, whom it would be difficult not to define as sectarian, to lose sight of the image. When we cannot get our politicians to sit in the Assembly they were elected to and we have bonfires with flags and effigies of people being burned on top of them then images like this one of Ciara and Laura are bright lights for a hopeful alternative. Indeed, an alternative to some of the Tweets my Tweet drew out.