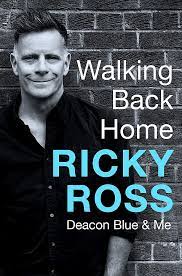 Ricky’s memoir Walking Back Home is basically a book where the rock star, songwriter, broadcaster and now writer ruminates on home, faith and work.

Deacon Blue fans will no doubt buy it to read about the band. If they want a chronological history then Paul English’s To Be Here Someday published late last year will be a more informative read. What we have here is a look before, behind and around the corner of the band’s main lyric writer.

Not that there are not some wonderful Deacon Blue moments captured. It is his work after all. Highlights for me were Ricky’s early years which through other friends I knew something about but never knew that Tom Morton had covered Surprised By Joy.

There is a kairos moment when the first classic Deacon Blue finally comes together after a whole lot of previous group efforts.

There are other kairos moments too. A spiritual moment when Ricky’s realises at a solo concert in Dublin that this his songs had potency whatever the audience - he calls the moment spiritual.

A wonderful moment at Glastonbury in 2011 when, having been scheduled in a tent at the same time that Coldplay were playing Mainstage, the expected no one to bother with them… and then the crowds arrived for what Ricky calls “the true second coming of Deacon Blue”.

Best of all Ricky shares a beautiful scenario before a Hogmanay gig at George Square, Glasgow when a council worker requests Dignity at a soundcheck. The song had come full circle. Sweet sweet moment.

Faith is maybe the strongest piece of yarn threading through the weave of the book. Ricky grew up strict Brethren and has ended up Roman Catholic. That’s not a dramatic story in the book but his stories of faith journey to there, not a ripping of traditions as much as a blend, on a path of discovering God particularly in joy and hope.

Before we get to home, I should mention that there is much travel too. Whether that is while touring with Deacon Blue, spending time in Nashville through his songwriting years or his work with SCIAF (Scottish Catholic International Aid Fund) to Zimbabwe and latterly along with Lorraine to Democratic Republic of Congo. Again the stories are at times funny, meeting Bruce Springsteen, swimming with Bono and Edge or incredibly poignant in meeting Claudette who told her of horrors violated upon her as she sat beside Claud who did some of the attacking.

Home? Home is Dundee and Glasgow, Scotland and family. He loves his home town and adopted city. His early youth work in Dundee and teaching in Glasgow are fondly described. The most fascinating, heart warming and inspiring stories in the book are of Grandads and Grannies and particularly his mum and dad. The poignant stories with them often seem happen in cars but they are the tale of a man who didn’t follow the vocation that his Brethren parents would have chosen or been comfortable with but how love held them strongly together so graciously.  .

There’s a car journey late in his mother’s life where his mother talks about a broken engagement and it gets linked to Ricky’s failed first marriage. It’s a powerful familial moment. This conversation says a lot about his mother’s coming to terms with her son’s life. I cannot help thinking that her grace is alive and well in the Ricky Ross that I have been privileged to spend some time with over recent years. I have admired his longing to bring different voices together, to listen with respect of the other. I reckon that is his parents living on right there.

There’s another culmination of events, I need to highlight. Deacon Blue’s last ever concert, or so it then seemed, was May 20th 1994. The day after Ricky and his dad’s beloved Dundee United are playing in the Scottish Cup Final. Ricky and his dad had already attended six such occasions and lost every one. This time they win and Ricky almost gets arrested on the pitch celebrating. Sadly, Ricky’s dad had died quite suddenly in hospital five weeks earlier, actually on the evening of the semi final replay. As they drove home celebrating they passed the hospital.

If you are looking for rock n roll gossip and stories of sex and drugs and rock n roll buy some other book. If you want to know what Real Gone Kid is really about, then check out other places. If you want a wonderfully well written memoir of a life that found his God given niche and touched so many of our lives then this is a beaut.

As I was writing this review I got to hear Ricky reading some of the book at the Féile an Phobail in Belfast. With that accent and voice, that we have heard for 35 years, the book came even more literary and alive. I’ll be adding the audio edition to the hard back for sure.