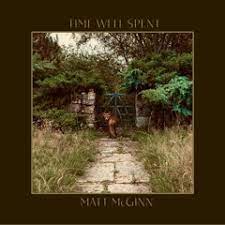 I have tried time after time to fall in love with Matt McGinn. A Nordie Irish songwriter who always seems to be hanging with Anthony Toner and Ken Haddock. Somehow it never happened. With my interest in peace and social justice issues I was sure his last album Lessons In War would be the one. But no…

Then the more personal Time Well Spent, an ambitious beaut of a record in its musical breadth and lyrical depth, lands and I am a fan. Oh I am a fan. This is wonderful stuff,

McGinn is a traditional folk songwriter. To put a paper weight such a thought, Aoife Scott daughter of Frances of the Irish Black dynasty duets the title track and Eliza Carthy daughter of Martin Carthy and Norma Waterson King and Queen of the England folk scene plays the most delicious viola on the title track.

With Matt McGinn, you think you should be hearing him with a peat fire lit behind him and big black creamy stouts in the tables around about.  Yet, do not confine McGinn’s pigeon hole.

Oh there are pipes and boxes and fiddles stern across but this is a varied array of styles. Yes, Killahalla is pure Mourne Mountain folk, sitting with emigrant songs like Luka Bloom’s Chicago and Paul Brady’s version of Hills Of Donegal. I hear Declan O’Rourke’s sublime Stars Over Kinvara in there too.

Before we know it, the next track has us in romantic happy waltzing France, Le Ciel Eat Bleu. Elsewhere Something drives along, fiddle fuelled and Lighthouse Joe after it. Keep Your Hands Off My Summer could be Anthony Toner attempting a cross between The Sawdoctors and Paul Brady. Woman echoes the sound  of north Antrim’s Bob Speers and rightfully declares the importance of the woman in all of our lives. Annie (Many Moons Ago) is a fascinating and very original love story about a mother leaving husband and daughter and all that followed.

Best of all is that title track. The sound is like that 90s sound of Mary Black covering another Jimmy McCarthy classic. But it is not a McCarthy song but McGinn’s very own. The most beautiful of simple love songs, perfectly executed. It’ll be the soundtrack of tonights walk on my holiday beach:

The sun go down as the world relents

Time with you is time well spent

As the sun goes down and the world relents

Time with you is time well spent