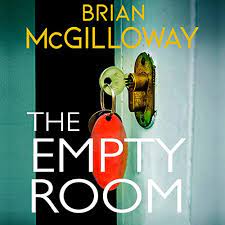 I picked up Brian McGilloway by chance. He’s a crime writer who doubles as teacher in Strabane. Does that suggest world class? Yet, I had money left on the governments £100 voucher to get the lockdown economy kicking and wanted to give it to my favourite bookshop No Alibis on Botanic Avenue. McGilloway's last novel Blood Ties was looking up at me and was signed. Against the odds, I don’t read thrillers, I gave it a lash.

Forgive me Strabane. How glad I am. Blood Ties was a revelation. The north west is a sea of writers, mainly out of Derry,  and here was an ordinary family man and teacher writing page turning stuff. The Awards and nominations for awards I now fully understood.

So, I started The Empty Room with more anticipation. A stand alone novel, Blood Ties was from his Inspector Devlin series, I wondered early on if it would work as well.

In the end it does. The Empty Room is a tough read. When Dora wakes up to find her daughter missing her world falls apart and we enter the world of a woman who is understandably heart broken and angry in ways that we will never understand. McGilloway tries to unravel her pyche.

He does more. He takes us on how Dora responds and we are on another page turning thriller with constant twists and turns that change the direction without ever feeling jarring or contrived. It is another riveting read.

What I love about McGilloway is that we are reading more than a thriller. He is turning up all kinds of thoughts that need thought. This one for me was written right into the heart of the Northern Irish Legacy issue, though interestingly, maybe for effect, we are not given a geographical centre for this novel.

How do those heartbroken and angry feel any kind of justice or healing? How do victims of bloody violence ever find themselves again? Is there a danger that in trying everything in your broken heart to get back to yourself you leave yourself even further away?

These thought and many others will linger for days as I ponder for a long time Dora, short for Pandora, opening the Pandora’s box as she sought to find her beloved Ellie and herself in the most harrowing assault life can throw at a parent.