SURMISING THAT GUNDOGAN MOMENT... THE HURT AND EUPHORIA! 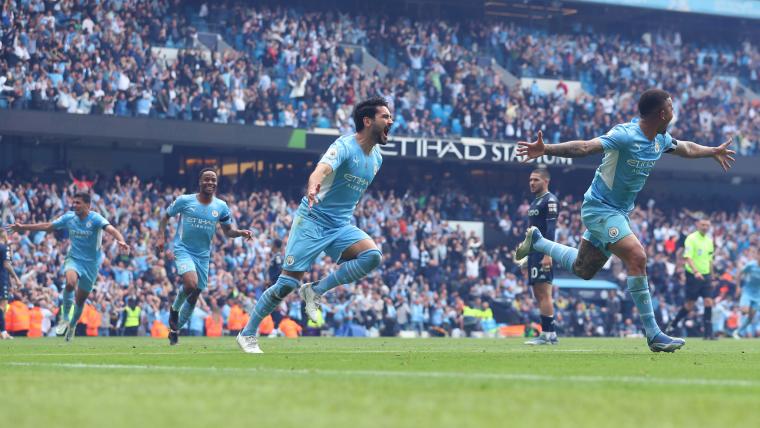 “Are you watching that again?” Janice asks at tea time when I am watching Ilkay Gundogan’s winner against Aston Villa that won the Premiership for Manchester City.

As a minister I take Monday’s off and today was dedicated to coming to term with yesterday’s final day of the football season and all its drama. I watched Match of The Day, then the aftermath of the Sky Sports live coverage. I watched various videos on the City website. At tea I am watching that goal… again… and again… I am watching City’s victory parade as I type!

Looking back it was almost predictable. As I sat down with my mate Boyd, with Monty and Philip on our WhatsApp Match Day Support Group, we were nervous. We all remembered QPR from 10 years ago. Lightning surely wouldn’t strike twice. We couldn’t save ourselves in injury time again.

If we went one down… we did… if we we went two down… we did. We were there again. It was almost unbelievable but we had almost felt we would. Against a team whose season was over and should have been on the beach we find ourselves huffing and puffing with no real threat and we’ve conceded almost two similar goals to that game ten years ago.

As we said… it couldn’t happen again. Our heads were down. Our hearts were sore. It is hardest to take losing the title when you throw it away in the final game.

And then Sterling gets the ball. What’s he doing… that shimmy to the byline… that cross… GUNDOGAN… goal!

Wait a minute… well a couple of minutes and Zinchenko cuts inside like a tricky winger… precise pass… Rodri with pace and perfect placement… goal!

What is happening? Can it happen again. It is the hope that kills you… loose ball… watch Kevin De Bruyne beat three defenders to the ball… pass… GUNDOGAN again… GOAL! Boyd and I are on our feet screaming with every sound that our bodies can release.

What just happened. It will go down in Premier history as the magic mad five minutes but… stop… stop Stockman… surmise…

Stop questioning Pep’s big game implosions. Pep fixed it. Today he changed it at half time. Zinchenko on the left and Sterling on the right. Instead of cutting in where Villa had more than matched us, take them wide. Then Gundogan. He has been our most natural midfield striker. He seems to know just where to be and when to arrive. Today he knew that to perfection. Pep got it right.

Stop questioning the character. Not only were we two down this weekend. We were two down last weekend at West Ham. Two games in a row we needed to show courage and resilience and belief.

Start remembering this decade. 4 titles in 5 seasons. 6 in 10. As a City fan I couldn’t have dreamt this 15 years ago. Oh and I know that is the cue for people to talk about money from the Middle East. It sits very uneasy, I will admit. I wish it didn’t have to be like that.

I wish it could be 1975 but it isn’t. And you can’t buy it. United have spent a lot of money and got worse. We bought Rodney Marsh in 1972 and it cost us the title!

I feel for my Liverpool supporting mates. They’ve topped 90 points twice recently and we’ve sneaked it. Maybe all teams that get 90 points should be given the title! They are also on for a possible treble though I’d say don’t assume anything at any time against Real Madrid!

In the 44 years between our 1968 and 2012 titles I thought winning once would be enough. Winning regularly could get boring and less emotional. I’ve had to rethink that surmise too. When you win it with all the drama, nerves, pain and utter euphoria of yesterday it is not at all boring.

So let us see how Haaland makes us better next season? Whether Grealish can come into his own? How good Foden can become? And… if we can hold Liverpool off one more time! See you in August. All to to play for… and in the meantime… CHAMPIONESE!

So much fun to watch the fan videos and feeds from the game and post-game. I can only take this once every 10-years, but boy are the memories joyful and fun! Let’s watch that eight minutes again, just one more time….