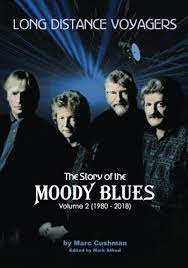 Of those I would still like to see published Justin Hayward would be high on my list. As I Have shared before as a 15 year old in an English essay I unpacked why if I could be someone else it would be Justin Hayward and not George Harrison! Quite a thought for a Beatles’ fanatic!

The reason was that it seem that Hayward had all the fame but not so much of the recognition. I was pretty sure that as Justin Hayward I could walk down a street pretty much unrecognised. As George Harrison I’d be hiding away behind the gates of Friar Park!

This of course is the reason that there will be no Justin Hayward memoir. He has kept his life out of the tabloids. He has done all his talking in the music. Forty five years after I became a fan I know very little about who Justin Hayward is.

In the absence of memoirs or even biographies on Hayward or all the rest of the Moody Blues Marc Cushman’s grand epic is what we can almost happily settle for.

As it says on the cover this is Long Distance Voyagers Volume 2. Volume 1 was 800 pages and took us from the beginning through the classic, second phase of the band, Days Of Future Past to Octave. A perfect fulcrum as Mike Ponder leaves and Patrick Moraz joins.

This was a fulcrum for me too. The last Moody Blues album I bought when it came out was Octave. I paid no attention to Long Distance Voyager and The Present and only really revisited anything post 1980 in the last five years.

That was the difference in Volume 1 and 2 for me. Volume 1 I was reflecting back on records I knew and loved well. Volume 2 was me discovering the records as I read about them.

If you are on such a journey then Cushman’s style is perfect. It is more almanac than traditional biography. He takes you through the making of each album, the songs, the reception and the tour thereafter. It is full of fascinating information and reviews, maybe too many reviews. Yet, I could read and listen along. Not only to the Moody Blues records but to the solo efforts even those of Mike Pinder’s sons!

It all begins with Mike Pinder leaving and the revival in fortunes that Long Distance Voyager brought the band and ends perfectly with them almost all together, including Pinder and even Denny Laine, at the Rock N Roll Hall Of Fame in 2018.

Outside the albums and tours there are a few snippets of information. Law suits and issues with Moraz about his membership and Pinder about the sue of the name. Yet, do we know any more about the members of this band at the end of it all - not much. Information of the band’s life partners, children or whereabouts is vague. Which is of course back to why my 15 year old self rather than a Beatle.

As I bask in their overdue membership of the Hall Of Fame I glance back across the second tome of the Cushman series and see myself enjoy Strange Times and Sur La Mer more than I ever dreamed I could. I also have Justin Hayward’s solo albums View From a Hill and Moving Mountains on heavier rotation. I loved Songwriter but hadn’t given these their worth.

I am also surmising the concept of of faith in the Moody Blues. Like the rest of their private lives but throughout Long Distance Voyagers Volume 2 faith appears more often than I’d have thought. I am thinking of John Lodge and Justin Hayward’s growing up in Church structures and watching its influence throughout a wonderful long distance voyage of music and song.