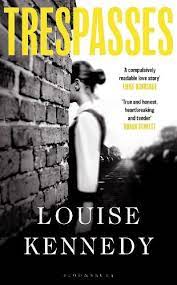 Trespasses is another fabulous novel from yet another new, if not young, voice in Northern Irish fiction. Louise Kennedy has been a chef for 30 years and suddenly arrives among us as this very assured, poetic writer of compulsive fiction.

Trespasses is just that. A compulsive read. It’s another love story across Catholic Protestant lines. Yet, as you read you could be forgiven for thinking that you had never read anything like it. Kennedy gives it this unique twist and an intriguing web of relationships and plots.

Cushla is the centre of the yarn. A 24 year old teacher, living with a drinking mother and helping her brother in the family owned pub. They are Catholics but the drinkers are mainly Protestant. She’s lovely in every way, particularly in how she looks after a pupil Davy who needs a little help particularly when his dad gets beaten up.

Cushla’s weakness is an affair with Michael Agnew, an older man, a barrister and married. It all takes a tragic Northern Irish moment, one of those morning headlines and the aftermath is sad and messy and again utterly compelling.

Enough spoilers! Kennedy has arrived as a gifted writer. She sets it in 1975 with a real eye for detail. That detail is in every scene in every page of every swing and turn. There is a feeling that you are there, involved wanting to give an opinion, whisper advice, scream!

It’s hard to not make comparisons with Kenneth Branagh’s Belfast. Perhaps a film version could be called Holywood, Co Down! It’s six year after Branagh’s. Northern Ireland is less romantic in every way. So there is much more realism.

There’s also Kennedy’s priest Fr Slattery who seems the equivalent of Branagh’s Presbyterian preacher. Both have make fleeting appearances but somehow don’t give a good impression of the church’s contribution at helping our wee place as we went through those dark dark days.