Home Archives Profile Subscribe
BEREAVEMENT SERVICE IN FITZROY - MAY 29, 2022
WHY FITZROY DO THE GOSPEL ACCORDING TO... SERIES?

A PERSONAL SURMISE ON THE KILLINGS IN UVALDE, TEXAS 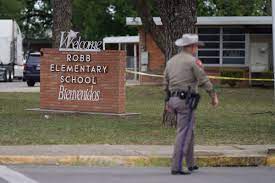 In June 1998 I was in Nashville for the wedding of friends David Dark and Sarah Masen. As I was there over the weekend I was asked to preach at Downtown Presbyterian.

What about telling us what it is like to live through the Northern Ireland Troubles?

As I was pondering what to say I read an article in a local Nashville paper that The Presbytery of Nashville was encouraging their ministers and elders to hand in their guns.

I had never heard anything so disturbing. I began to imagine a scenario, any scenario, where Presbyterian elders and ministers in Ireland had guns. It was frightening. I was able to get up on the Sunday morning and suggest that even though guns had destroyed our wee country for 25 bloody years that we at last were taking the guns out of our society. America was a much more dangerous society than ours, I suggested.

These last days I am heartbroken again at the news of another gun massacre of children at school, this time in Uvalde, Texas. In my job I have sat with parents who have lost children. It is not the natural way of things. It is viscerally heartbreaking. Parents are never the same again. Nineteen dead children. Two dead teachers. A dead eighteen year old killer. Seventeen injured. It beggars belief. It needs our prayers. And, sadly, it is not an isolated incident.

Listening to the polarisation about guns and gun control in America has bruised my heart even more. It is so difficult for us outside of America to comprehend the attitude towards guns and so I have found myself resisting throwing the trite Tweet into a debate that I simply cannot comprehend.

I have found myself being very grateful that in our own broken land with all of its unique disfunction and mostly outdated ideologies that at least I live in a place where eighteen year olds cannot easily purchase and carry guns; a society that feels the safety of tight gun control.

I am grateful that when an attack took place in my wife’s old school, Sullivan Upper, in 1994 that our gun laws prevented the attacker having such deadly weapons. He had to resort to a flame thrower and though tragically a few students were seriously burned, none were killed. One can only imagine what might have been. Gratitude!

Sadly, as I have surmised the American gun debate this week, I have to set lament alongside my gratitude. As America responds this week I have come to pray that God can give me resilience for the inevitable heartaches to come. Open hearts are prone to breaking. I cannot switch my emotions off or grow cold to news of innocent children being gunned down. I ask God to help me as we tragically respond to more places that will be added to Uvalde, Columbine, Sandyhook, Virginia Tech…