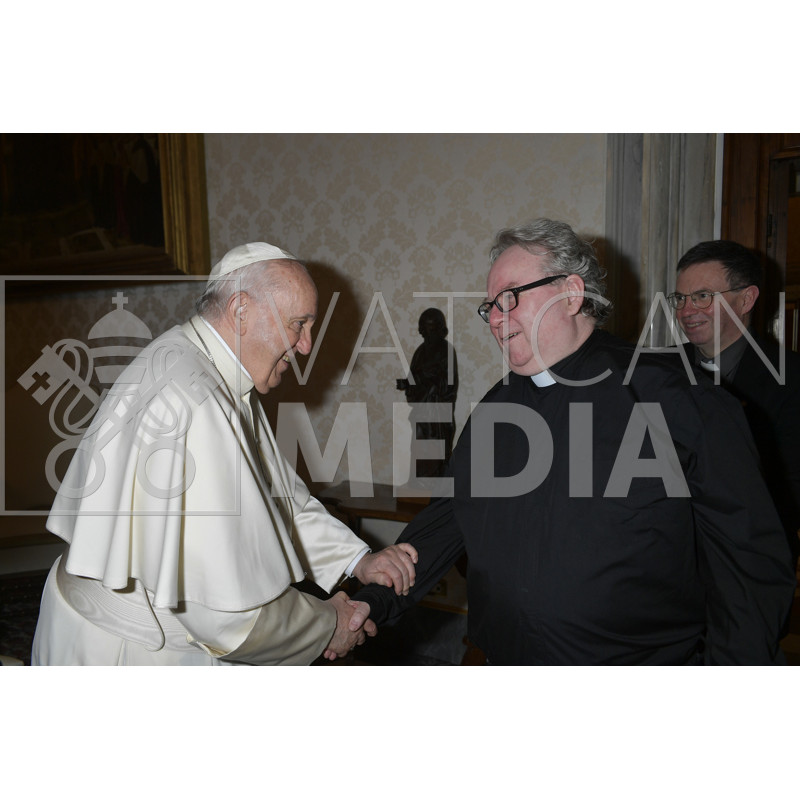 It is not every day that you get to meet the Pope. Even less chance if you are a Presbyterian minister. Yet, today, that is exactly what my wife Janice and I did. It was very moving and inspirational.

We woke up to Rome on a Bank Holiday. It was buzzing and crowded. Arriving in St Peter's Square, it was already filling up. All day long people were queuing up to just get into St. Peter's Basilica. Quite a bombardment of stimuli.

Soon though we were out of the maddening crowd and ascending the stairs in the Apostolic Palace  to empty rooms and finally reaching Pope Francis' private library.

My dear friend Fr Martin Magill and I were there in recognition of our work with the 4 Corners Festival. Austen Ivereigh as the Pope's biographer and co-writer had pulled some strings! Thank you brother.

Austen also made it possible for the Catholic Chaplaincy at Queen's University Belfast, celebrating their 50th year, to have a personal meeting too. So we reached that library with that group and there was Pope Francis to welcome us.

It was moving to receive his welcome. As he reached to shake my hand I leaned in and told him that I was a Presbyterian and he took my other arm and kindly welcomed me even more.

Pope Francis has a warmth about him. He has a humility that is perhaps not expected of Popes or world leaders. Very quickly I sensed that all that I had thought about him was true. He has an open and gracious heart. He is keen to make you at ease, to feel special. He has a Christlikeness.

He is also funny. He had given us his written script but quickly told us we could read that later so instead what did we want to ask. That is a brave decision for a man of 86. He hands over control to whatever questions are thrown. He has to be sharp and think quickly to answer.

His answers were wise and full of great Biblical content. Fr Martin and I were keen that the students got to ask the questions. They asked good ones about sharing Jesus and living out their faith.

Pope Francis started by easing their intensity and told them to live like students. He shared his own experience. How he had done just enough work to get through. How important humour and friendship was to those student years.

He told us to get ourselves a little book of the Gospels. Have it on our pockets. Read it when the opportunities came. Then most of all, he told us, wear it. If we want to share it with our friends we shouldn't go around preaching at them. He said that the soul is moved by witness. Live the Gospel out in our lives.

Perhaps it was having a couple of Presbyterians in the room but he then shared about being out walking with his grandfather at around the age of 5 and bumping into two women from the Salvation Army. He said it was his first ecumenical moment. He encouraged the students to see their Protestant friends as brothers and sisters in Christ.

He talked about how we should send all the theologians out onto an island where they could debate the theological differences while the rest of us stayed in the real world and got on with it. That 'it' was very clearly the living out of the Gospel, working together in Kingdom building, justice and peace.

Near the end, I thanked the Pope for his message to our 4 Corners Festival and how amazing it was to have his message open this years festival and then having Archbishop of Canterbury, Justin Welby, to close it. I then asked about how he felt we were working together now. This gave him the opportunity to speak fondly about his brother Justin Welby and their working together for peace in South Sudan.

South Sudan means a lot to Janice, myself and Fitzroy as we funded a school in Arua, Uganda just about 40 miles from the South Sudan border. Pope Francis told us that they were keen to meet the South Sudan leaders in July but refused to respond to their invite until Justin Welby was invited on an equal footing to himself. That humility again. That working together.

I am sure many will not agree with me visiting a Pope in the Vatican. I will graciously understand and beg to differ. For me it was an honour that Pope Francis recognised the work that the 4 Corners Festival does. As the leader of the Catholic Church it was an honour to be invited into his presence.

Yet, I did not feel that I had met with some head of Church as much as an elder in the faith, someone ahead of me in the journey who could impart wisdom and inspiration. A little like what Presbyterian ministers Ken Newell and Trevor Morrow have been doing for some years.

I know that I will unpack that hour in the Apostolic Palace for some time, pulling out everything said. The most vital thing I take away is his challenge to wear Jesus, be an authentic witness to Christ. To be as humble and human and redeemed as he obviously is.

As we left he asked that I would pray for him. I heard from a Belgian priest outside that Francis has arthritis in his knees and is in some pain. I told him I would pray for him, especially his knees. He thanked me and I was gone... gone to continue to follow the same Jesus my brother Francis follows.

What a lovely summary of what sounds like a fantastic and memorable day. I wish I'd been there! Your recount is a great step towards bringing our communities in NI closer together, thank you for sharing!

What a beautiful surmising and inspiration for all Christians to keep journeying together ...to keep Jesus present amongst us and allow Him to be visible through our mutual love. Sounds like a wonderful encounter and surely you and Janice were a gift for Pope Francis.

Steve I was delighted and moved by your account of your meeting with Pope Francis. His message to your group was simple and yet so central to what we as Christians must strive to do. Wear our faith for others to see and share. God bless you and Fr Martin for your great work and it is clear that this thought and prayer was in the mind of Pope Francis as well. Thank you for sharing this and making the world a better place .

The older I get the less I seem to "know" about my faith but I firmly believe the world is a better place for having you and Pope Francis in it. Keep shining brightly brother.

What a wonderful encounter.

Those are beautiful words and I think you mean what you say Isn’t a pity everyone can’t take that on board!

Thank you for this lovely update on your visit to meet the Pope.
I look forward to reading more of your recollections.
May God bless you and Father Martin in your work for the Lord.

Wonderful Steve,thanks for sharing and keep doing what you do.

Steve, what a wonderful and joyful experience. Thank you for sharing your story and your hopes and prayers. Be well my friend. John

Presbyterian doctrine teaches that the Pope is antichrist, The Protestant Reformers were convinced of it and many still hold that Reformed doctrine today. The Jesuits can tell u black is white and you are expected to believe it. God's word says, Come out of her my people. Sadly many sheep in wolves clothing still desire to lead the sheep back to Rome.

In response to Wesley above: Then ‘Presbyterian doctrine’ is clearly wrong if that’s what it currently teaches. Pope Francis is obviously a very real and humble Christian leader as Steve has observed. As far as the Jesuits are concerned, I know quite a few of them and none of them are like the caricature you describe. Rather they are faithful followers of Christ and great examples of faith.

A beautiful moment. A touchstone to which I’m sure you’ll return in happy and in difficult times alike. Lucky Martin and Steve to have met Francis. Lucky Francis to have met Martin and Steve. All travellers on the same road together. Pontifex Maximus… a quare big bridge was built during that hour alright.

Thank you for this Steve, beautifully written. You are very gracious. God bless your work.

So encouraging to read. Thank you Steve. In sharp contrast, it reminded me of hearing of a fellow QUB theology student who, some years after we had graduated in the 70s (and lost touch), went on to be a Presbyterian minister in a town in NI. On Christmas Day he had walked across the street from his church to wish the congregation of the town's Catholic church a merry Christmas. He and his family subsequently had to flee to England due to the death threats they received. Your story here is a shining example of how NI has moved on from that level of bigotry and hate and I am grateful for the work you, Ken Newell, Norman Hamilton and many others have put in to build that trust and respect. More to do, but much achieved.