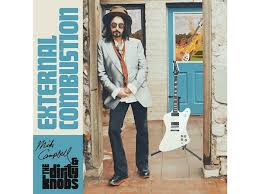 Forgive me Mike Campbell. You have ridden faithfully side saddle to one of my main men Tom Petty for nearly fifty years and I have loved you that entire pilgrimage. BUT when you started a band called The Dirty Knobs I thought the name suggested a funny side project.

So, Mike, I confess I was wrong. It has taken about three weeks of dipping in and out but I have to conclude that this is an album to be taken seriously.

Not that it is not full of fun. This band loves to play and you can hear the fun they are having. Check out Rat City. However, that does not suggest it is not weighty in quality. Over all it is a guitar toting record, harder than those Petty days, full of stunning solos. On Rat City I was even hearing  Rossington and Collins duelling in Lynyrd Skynyrd days..

Campbell can be subtle and tender too. He did write Boys Of Summer for Don Henley and has just toured with Fleetwood Mac. In This Lifetime perhaps hints at why Petty was the voice of The Heartbreakers but it’s still a beautiful ballad.

The other ballad State Of Mind has the wonderful voice of Margo Price on a beautiful song of love, grace, loss and disorientation.

Campbell has a lyrical touch too. I love his preach at the materialist Hersey of the age:

In the back of a Southbound Greyhound bus

And blinded by greed

You better find out what you really need

And I hear him loud and clear when he warns about how we are treating the planet and its effects on our children:

People of all ages

It's time to make some hard choices.

With the hope of warmer weather and who knows maybe a summer, External Combustion will be a great wee driving album. It’s not Tom Petty and The Heartbreakers but It rocks.