THE GOSPEL ACCORDING TO... NEIGHBOURS 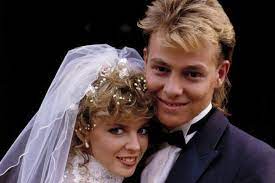 I am hearing that Neighbours is coming to an end. The Australian soap opera, that has been going for 37 years, cannot find a Channel to air it.

That was not the case in November 1988 when Scott and Charlene’s wedding was watched by no less than 19.8 million of the British population.

Of course in real life Scott (Jason Donovan) and Charlene (Kylie Minogue) were number 1 in the UK charts with their duet Especially For You that very same month. Let me make clear that I didn’t buy that! BUT… what clever marketing!

I do confess that in 1988 Neighbours was a linchpin to the rhythm to my day. I was a young assistant minster in First Antrim at the time. I was living in a little flat in Central Park. I would go out and do some visits in the morning and would always be home for lunch during which, I would watch Neighbours. For me it was a strange obsession but it was an obsession.

As a result of its huge popularity and the amount of it that I was watching it was only a matter of time that it became a constant reference point in my sermons and particularly children’s addresses. I remember my boss, John Dixon, suggesting that I do a book about how to teach the Catechism through Neighbours’ stories!

The day after Scott and Carlene’s wedding I was doing an Assembly in Antrim Primary School. When I asked who saw the wedding the day before literally every child’s hand went up like their team had just scored a goal in the Cup Final. Every hand. In unison.

Now that wedding for me is The Gospel According To… Neighbours.

If you are old enough and can go back, and many of my congregation told me that they remember the wedding like it was yesterday, then you’ll remember that at the same time of Scott and Charlene’s wedding there was another Neighbours’ wedding. Paul, Scott’s brother, and Gail, Paul’s employee in his hotel, also got married.

Now, there could not have been two more different marriages. Scott and Charlene were still teens. It was a romance of such wild abandon that before they wed Charlene jumped out of her bedroom window while being grounded for a quick kiss with Scott at the refuse bins. This was LOVE!

Paul and Gail however. Not so much. In order to woo a Japanese investor Paul had to look married and settled down so he asked Gail to marry him to help the business. There was a telling scene where Paul opens the drawer in his office and takes a glance across the contract to see what is expected of him… and her!

It was so easy for me to use these two different relationships to ask about how we see ourselves and God. Is our relationship with God a law keeping contract that we must keep or else? Or is it a relationship of love and adoration? We are excited to be around God.

Jesus said. “If you love me, keep my commands. And I will ask the Father, and he will give you another advocate to help you and be with you forever— the Spirit of truth.” (John 14: 15-16)

In Galatians Paul writes about a shift from law to grace in the coming of Jesus - “Before the coming of this faith,[j] we were held in custody under the law, locked up until the faith that was to come would be revealed. So the law was our guardian until Christ came that we might be justified by faith. Now that this faith has come, we are no longer under a guardian.” (Galatians 3: 23-25)

From there my sermon’s conclusion was simple. Paul and Gail… or Scott and Charlene. Law… or love?