Home Archives Profile Subscribe
GOD IN THE CITY; BELFAST AS A CATHEDRAL
I SURMISE 1 MILLION HITS ON SOUL SURMISE 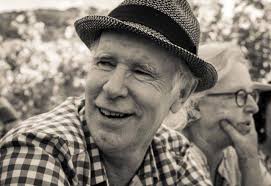 I was saddened to hear of the death of Mike Riddell. Mike had a massive influence on my life, particularly in the late 90s, early 2000s.

It all started with his mystical little book Godzone; A Guide To The Travels Of My Soul. In his poetic prose Mike opened wide the horizons of my soul and endorsed the adventure for God that I needed articulated.

He then helped my mind open from the rigidity of my theological thinking in his book Threshold of the Future - Reforming the Church in the Post-Christian West before arriving at Greenbelt to become our friend.

Mike actually came to my first ever seminar at Greenbelt. Speakers don’t do that. I’ll be honest, it freaked me out but needn’t have as his encouragement was life giving. Mike wanted to be your mate more than he wanted to be a preacher pop star. In fact he might not have known what the latter idea was.

Having opened my soul and mind Mike reached for my heart in his literary work. Insatiable Moon was so profound. I wanted to hide it, it was so scandalous, and then realised that that feeling was the point.

His play Jerusalem Jerusalem I saw twice. At Greenbelt and then wonderfully in Belfast. This opening up of the life of radical New Zealand poet James K Baxter had me reassessing the revolutionary nature of Jesus' life, tearing down the ivory towers of Church and the real big dangerous real world.

My favourite Mike Riddell moment though happened on a journey home from Greenbelt. I had a full car of punters, sleeping off four days of music, seminars and Tiny Tea Tent conversations. To keep me awake I was listening to recordings of the seminars I had missed.

Mike told a tale that had me reaching all around the front of my car for a piece of paper and a pen to write down the quote at the end of it. I could almost take you to the spot in the road on the far side of Dumfries

Mike spoke of a woman he knew who had a lovely faith but a real drug addiction. She would one day be praying wonderfully at the Prayer meeting and then literally lost in the gutter the next. Then he said “Some might think it is a blasphemy but I believe that God loved her as much in the gutter as at the prayer meeting.”

This is Riddellesque. Taking what we tidied up as taboos and reclaiming the Gospel within them. Opening Jesus up to his most shocking. The shocking that would have the religious crucify him in any generation.

For me this line was grace personified. I stole it for a poem. Sam Hill and Phil Baggaley made it a song, Soaked In A Dearer Wine that featured on our record Grace Notes.

"Some may think it's blasphemy

But I believe it's true

God lies there beside you in the gutter

(Listen to the song here)

It is a long time since we have shared a beverage but every time New Zealand was mentioned you were in my thoughts my friend. Thank you so much Mike Riddell.

Deeply saddened like yourself regarding Mike's death. Can't say I ever met him or heard him speak like you did Steve but did read many of his books. In his books to me Mike was someone who didn't domesticate Jesus or the gospel he put it out there in its true radicalness even if it offended the religious police, which comes across in your own words Steve also and for that I think we Can be only deeply grateful to Mike and the radical truth of the gospel he proclaimed. Mike Riddell RIP.

Mike was a bright light. Full of humour, insight and energy. A great friend, an inspiring writer, a hard worker and a barrel of laughs. Such a family man and so deeply missed.

Mike Riddell was a true prophet of the modern day - perhaps one of the most infulential and inspirational people in my life - I used more quotes from Godzone in my sermons, than I did the Bible

Really sad to hear about his death

For me, he untangled the mess then institutional Church has got itself into, he spoke with truth, integrity, wisdom and love

And I’m grateful and honoured to have interacted with him

Greetings from Godzone (New Zealand).
Just like you Steve, "Godzone; A Guide to the Travels of the Soul" is one of my key 'lodestar' books. To quote one of the reviewers, "Its most extraordinary achievement is that the Christian spiritual journey is navigated without using religious language."

27 years ago now in the mid-90s, I had the privilege and joy of working with Mike in an 'alternative fellowship/worship' project called The Parallel Universe alongside the other key driver of that project, Mark Pierson, then pastor of Cityside Baptist Church . It ran for a couple of years out of a pub venue at the top of Symonds St in Central Auckland, and it took a 'non-religious', themes-exploration approach, to try to reach people who wouldn't give 'normal' church 30 seconds of their time. I believe Mike and Mark subsequently put together an online work, 'The Prodigal Project' that encapsulated some of the material used in the Parallel Universe.

I had lost touch with Mike until one day in January 2021, a 'promo' email targeting the book acquisitions staff of our libraries got trapped by our mail content monitoring solution. Our long suffering librarians endure numerous 'spruikers' of aspirational authors wanting their magnum opuses to be bought on municipal dime. But on this occasion, my eyes lit up, 'cos it was Mike himself promoting his latest book:
http://www.nationwidebooks.co.nz/publisher/holy-bucket-productions
"Until The End; Notes From A Small Life".
The title unsettled me 'cos it suggested some sort of swan-song, and as I read his accompanying author bio summary my worst fears were confirmed.

I purposed in my heart that I should try and re-establish contact and meet up with him while he was still alive, if for nothing else but to let him know how his writing had been such good 'soul food' for me and also others of whom I had shared his book with.

And so it came to pass...I am a motorcyclist with 39 years saddle time and experience. I know the roads of Godzone (NZ) well.
In April 2021 I tiki-toured to the South Island to rediscover parts of Central Otago I hadn't seen for some 27 years and my 'spiritual pilgrimage' to reconnect with Mike, one of my several esteemed spiritual mentors.
And along the way, a serendipitous spiritous discovery of Lammermore whisky!
{ https://lammermoordistillery.com/products/lammermoor-special-reserve }, distilled on the opposite side of the expansive Maniototo Valley from where Mike & Rosemary have called home (Oturehua) for the last 4 or so years).

It was so good to catch up with Mike over breakfast at "Annie's Cafe" just out of Oturehua at the fascinating historic Hayes Engineering Works museum. At the time he said he was hale and hearty with the meds still working well to keep the demon-C at bay. He almost seemed slightly embarassed when I shared how much of an impact "Godzone..." had been for me and other fellow followers of The Way of Yeshua. And yet he was more than happy to autograph the 2 copies of "Godzone" I had with me, and bought several more copies from his residual personal cache. They are now of inestimable value to me.

If I may close by excerpting from the closing section of 'Godzone...'
Homecoming
You, however, have the hunger for God in your heart and the itch of the road in your feet...
Godzone is yours to explore, from here to the edge of the world. And beyond the world, when the compromises and midnight aches lose their long-fingered grip, God waits to welcome you home.

The Zone is your natural habitat. It is what you were created for... The time will come when all will make sense...In the fullness of the Zone, God will be with you in such a way that you will not know where you stop and God starts. Like two old and tender lovers folding their bodies so perfectly together, there will be consumation of the deep tide of love... You will be whole, and healed and held.
...
This land between the ages is not our homeland, and we can never settle here. We must move on, pressing toward the end of the road which never seems to end. Its end, of course, is God. We ragged refugees have a home, and we will come to it. The crowds of unseen onlookers will cheer us across that last Final Stretch; our brother Jesus will take us by the hand and lead us in. There you will find such a collection of geeks and oddballs and misfits as you never thought possible, and you will be at home with them--and in in them and through them and around them, God.

Oh, and in the distance, something awfully familiar. The Road. What did you expect? Clouds and harps maybe?
[end]

Vale Mike Riddell. As you stepped into Eternity, Yeshua will have shown you the fullness of the fruit of your labours saying "Well done my faithful co-worker, have a well earned break". And beside Him, your beloved daughter Polly who preceded you some 3 years before, running to hug you saying "So good to see you again Dad"