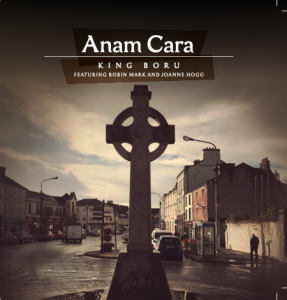 If you ask East Belfast troubadour Brian Houston about where he fell in love with all things Irish he will take you to a Canadian native Indian Cree Reservation where he was shocked to hear them singing doo wop worship instead of songs in their own cultural sounds. I’ve been there myself in Africa.

This Cree Indian effort to sing other culture’s rhythms and melodies led the Irish songwriter, sometimes worship leader, to think about his own Irish heritage.

Brian Houston is a raw spiritual soul and he jumped with his usual passion right deep into it. Even down to the Irish language that politically in Northern Ireland is not championed in the Braniel estate of Houston’s childhood.

Eventually all this brings us Anam Cara. The first sound is the Uilleann pipes of John McSherry. Now, for me that always sounds ancient and spiritual to me. It’s Ireland’s Soul Music. Perfect for worship. Throughout Anam Cara the pipes are like a musical code into an ancient Celtic soul stream.

So opens Beannacht. There’s that Irish language. Blessing! The language is sprinkled across these songs, apart from on Óró sé bheatha abhail, where it dominates. The Irish language is so beautiful and on this song the shifting from Irish to English really works There’s a Clannad almost Horslips feel to it.

Come Let Us Worship Him with its visceral bodhran, harmonies, flute and ‘heys’ could be heard round a 5th century gathering of the faithful round an outside fire.

God Is Great has similar drive but not so ancient and could be heard any Sunday in any modern Church where Bethel worship songs reign supreme.

Uisce Beatha (Water of Life) has those pipes again and is a mediative piece full of peat fires, glens and sacred shawls in a mesmerising mediative piece that has a geographical centre as well as a transcendent one.

In the end what we might have here is one of Houston’s most original and satisfying albums. Take the closing The Voyage Of St Columbanus where Brian has arranged a short sacred Celtic poem with the pipes throwing atmospheres of the sea, sky and weather in a spoken word poem of pilgrimage.

Maybe Brian Houston’s most artistic and adventurous piece of work.