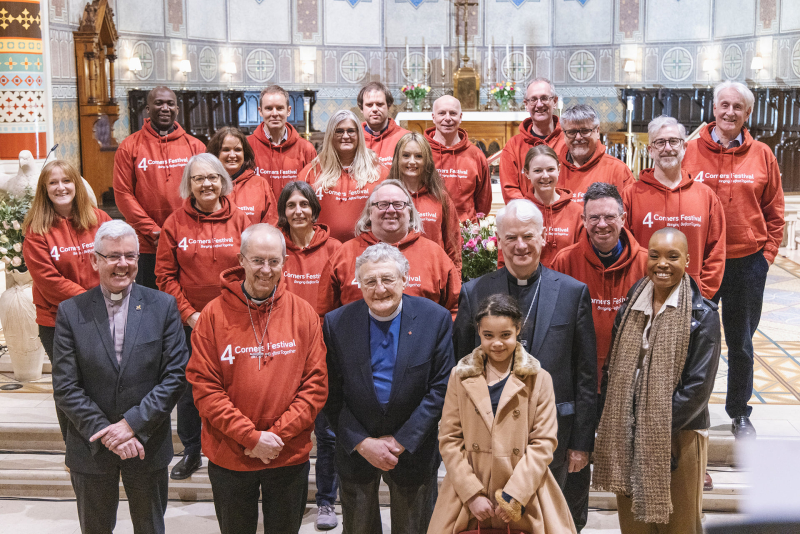 Dana Masters’ voice. Oh my goodness. What a voice. I have attended live music for 45 years and yet Dana filling St Peter’s Cathedral was by far the most emotional musical moment of my life. I wept, line after line. That my wife, sitting somewhere else had the same experience… and others. Incredible.

Her love song for Ireland. When you have been at a festival that speaks into our divisions and dark side how healing it was to hear a South Carolina woman call our wee place home. Her story of her Grandmother, a major player in the Civil Rights movement, before singing Little Girl that she wrote imagining her Grandmother speaking to her children was so moving.

Later she reappeared to sing accapela Sam Cooke’s A Change is Gonna Come. It was like her voice called hope out of heaven and set it like a blanket over us. Astonishingly beautiful and yet so much more… strong… resilient…courageous… hope-filled. She’s her grandmother’s granddaughter and we are so blessed to have her in Belfast, particularly in St. Peter’s tonight.

In between her songs was the Archbishop of Canterbury, Justin Welby! It was like he made the power of Dana's songs into words. His address was filled with war yet there was love and kindness and forgiveness and humour.

He joked that he hadn't been told that he had to follow Pope Francis whose video message started the Festival in St Anne's. He called the Pope a brother. He later went into a story of the Pope and himself with all the violent factions sides of the South Sudan civil war. He told us that the Pope got on his knees and kissed the feet of all the protagonists to beg them for peace. My goodness. The humility. The sense of Christ washing his disciples feet.

The Archbishop had so many moving stories. I was most drawn to those from Coventry where he once served as Dean. After the bombing of the city in December 1940 the words ‘Father Forgive’ were written on the wall of the ruined chancel. Some wondered whether it meant “Father, forgive them”: the enemy who had bombed their city, ended lives, and destroyed livelihoods. But the Cathedral Provost reminded them of the Epistle to the Romans: “For all have sinned and fallen short of the glory of God.”

He followed that with the story of a guide at the Cathedral who welcomed a man who admitted that he had been to Coventry once before - in a bomber plane. The guide had lost his brother as a result of those bombs. He felt his fist tighten but then decided he had spoken about reconciliation for 20 years as a guide and therefore had to forgive.

It was powerful stuff. There was so much more. I loved his three habits of peace making - curiosity, the need to be present and the ability to reimagine.

I was most changed by another line -

“Whenever we are tempted to draw lines between ‘us’ and ‘them’, Jesus can always also be found on the other side.” Wow!

Just to add to Dana and the Archbishop the evening began with Tony Macauley sharing an item that reminds him of 4 Corners Festival. Tony was the first speaker at our very first event in 2013. It was in his old church Ballygomartin. He read his book Paper Boy set right there.

That night he talked about the disco his dad DJed in a hut round the corner. Every night ended with The Last Waltz by Engelbert Humperdinck. Shortly afterwards some on fund the actual single his dad used in an attic and Tony’s item was that single framed.

And so we turned full circle but none of us could have imagined when Tony spoken back then what this wee Festival would become.

Happy 10th Birthday 4 Corners Festival. That was our kind of party!

..it was challenging and inspiring and set out a peace seeped in the love of God…thanks for being part of the journey of peace making and peace building! Be blessed!