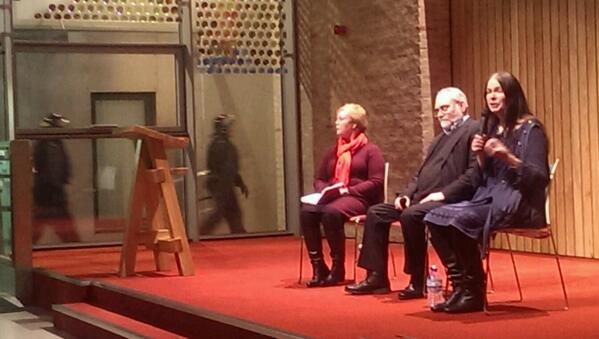 I thought I would write a blog about some 4 Corners Festival moments as we celebrate 10 years. I wanted to write something about the night that we caused a riot. We were front page news the next day. In the end I couldn't better the blog I wrote the very night it all happened. A 4 Corners Festival moment for sure but also an evening that said so much about what we hope to do.

“Now some small parts seem right scattered here and there

One smiling face in a crowd that’s angry and scared

Can’t seem to see where it doesn’t get worse

I try to write Buddha and it comes out guns

I vote for peace and the blood still runs

I want to believe I can pass happy to my child

But the truth gets lost and the system runs wild”

I thought that a “good thought getting lost in an angry verse” was as good a description of the evenings events as I could come up with. The Festival event was called Listening To Your Enemies while outside on the street people shouted abuse, threw stones and injured policemen because they didn’t want their enemies to be even in their corner of the city. I had entered Skainos early and didn’t have the intimidation others had arriving but at one point as the crowd surged towards the front of the building we had to move away from the window, fearing it might come in around us. Leaving, on a route lined by riot police, I found myself stuck behind an armoured Land Rover with Union Jack clad menace all around. It was tense. As Crosby was singing, the truth was getting lost as the system that has kept our city captive for so long was running wild.

“Send me someone who has doubts about it

Someone who won’t give up in the frozen rain

That was what we experienced inside Skainos; people conquering their fears and yet not without doubts. People not giving up but seeking a way through the frozen rain. Jo Berry is a brave woman whose father was killed when the IRA bombed a hotel in Brighton in 1984. Beside her was Patrick Magee the man who had planted the bomb. He was also the enemy that those outside were protesting about. The discomfort of the situation was best illustrated when, as Jo spoke, a line of Riot Police walked down the corridor on the other side of a window wall. “We are just back from Beirut and it was easier than this,” Jo humorously commented.

The discomfort of what was going on outside was matched by a discomfort of what was going inside and yet a very different discomfort. Inside was filled with hope, a tangible and inspiring hope, but I felt that my soul needed spiritual riot police to protect me from the trauma that was being so honestly and eloquently shared. Jo’s tentative reaching out to Patrick and the nervousness of their first meeting. Patrick’s journey to re-humanise Anthony Berry and say, “It's difficult sitting with Jo because I killed her father. Even after 14 years of dialogue [with her] it's still difficult.”

Their story was moving but the evening was far from finished. When Lesley Carroll opened it up to the floor the first woman to speak shared how her husband was the milkman shot dead in retaliation for the Brighton bomb. She explained how she had to attend tonight and shared about the thorn in her heart and her head, always there, but she needed to pay tribute to her husband to deal with that thorn in her head. Another man shared how he had been blown up in a bomb 38 years ago this very night and his good friend Jim Smiley was killed in the attack. Sweet mercy!

There were other comments, questions and challenges to Jo and Patrick. Jo shared how Conservative politician Norman Tebbit, injured in the bomb and whose wife was paralysed in the blast, has never spoken to her. Tebbit feels that she is betraying her father. Patrick shared how he had never come to terms with what forgiveness meant and wasn’t looking for it. Both were asked if they saw Patrick as a terrorist or a soldier. Patrick saw himself as neither and Jo saw him just as a friend! When asked by a loyalist ex-combatant if he had come to believe that what he did was not justified, as the loyalist now believed about his own involvement, Patrick stood firm in his belief that for him as a Republican what he had done was the only way.

In all the sharing and questions and disagreements, there was a humble gracious listening in the room. It is what 4 Corners had been aiming to do this year. To allow people to share their story but maybe more importantly to listen to one another’s story in a non adversarial way. This was exactly the atmosphere we had been hoping for. It was a grace space that our city needs more of. In that way, what was going on in the room was the very antithesis of what was going on outside where the vitriolic crowd was not prepared to listen at all.

As I drove the last mile home up the Lisburn Road, that looked so calm and unaware of the riots that our wee Festival had caused in another corner of the same city, I reflected on this dangerous night and dared to dream. David Crosby continued to sing me home...

Scenes from the television in the blue light it cast

Seek peace in your own heart sounds true, sounds right

I’m a troubled soul searching for peace in the night

Trying to figure out how it all fits together

Humans and sun and oceans and weather

And even if I dream alone on such a dangerous night

Tryin’ to make all these pieces fit right

Even if I dream alone on such a dangerous night

Tickets for this year's Festival - https://4cornersfestival.com