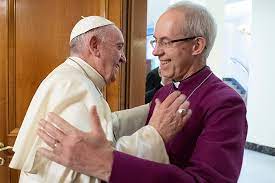 For 10 years it has been our little 4 Corners planning committee joke. The Archbishop of Canterbury! Pope Francis! We should ask them. I guess if you are a Christian based Festival across the divides those are the star players! Ha! Ha! Ha! Any other business.

It was our 10th Anniversary and so we thought we’d test it, stretch it, dream. The Archbishop just might. We knew that he knew about us. Various parts of our planning group had done things with him. His chief of staff David Porter was a long pioneer of peace making in Northern Ireland and had spoken at a past Festival.

When he agreed we were thrilled. We love to bookend the Festival with theological reflection. To end our 10th Anniversary with the Archbishop was almost perfect.

Almost! I am not sure when someone mentioned Austin Ivereigh. I had been taken with Pope Francis’ book Let Us Dream. Someone mentioned the guy who wrote it with Francis. What? He lives in England.

It wasn’t very long before I was suggesting Austin as the bookend. If we couldn’t start the 10th Anniversary 4 Corners Festival with the the Pope as the bookend for the Archbishop then surely a man who has written two biographies on Pope Francis might be a very fine replacement.

On investigation we only received positive recommendations on Austin and were then utterly thrilled that he agreed to come. Once we had Zoomed him we were more than excited.

If we couldn’t have Pope Francis then Austin Ivereigh is as close we could get. Austin was not just a scribe for Let Us Dream but a shaper of the prophetic insights that Francis shares.

As I wrote in my review there are some very clear lessons for us here in Northern Ireland. The Pope talks about the “great danger in remembering the guilt of others to proclaim my own innocence” and of “reducing a person’s history to the wrong they did.” He implores us to  “look at the past critically but with empathy.” It seems to me that such attitudes would help our healing?

Pope Francis also shares a lesson from the synodal approach taken by the Catholic Church. “Rigidity is the sign of a bad spirit concealing something” but a synodal approach is about “mutual listening” and the “productive tension of walking together” . These latter quotations touch on this year’s 4 Corners Festival theme Common Ground Common Good.

I am excited because I believe we have ended up with a near perfect set of book ends for our 10th Anniversary. The Anglican Archbishop of Canterbury in St Peter’s Catholic Cathedral will close our week BUT just as exciting Pope Francis’s writing partner in his most recent book will set the week off in the Anglican Cathedral at St Anne’s.