Home Archives Profile Subscribe
JOHN MELLENCAMP - STRICTLY A ONE-EYED JACK
JAMIE DORNAN - IS LOSING YOUR MEMORY A GET OUT? 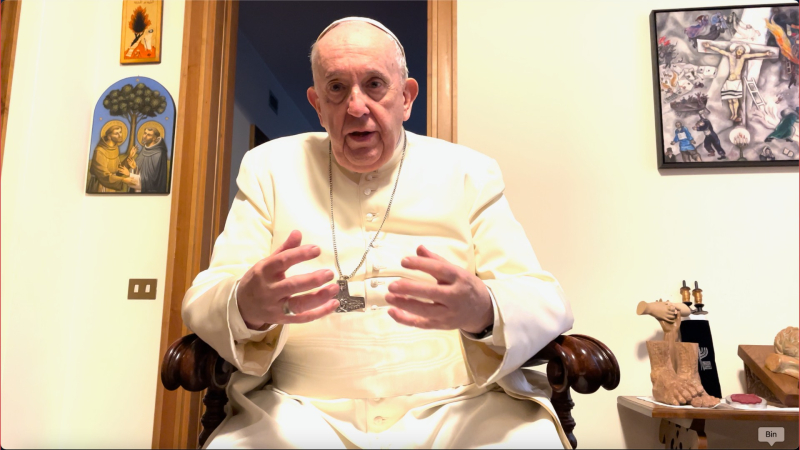 Breaking news on social media today is Pope Francis at the 4 Corners Festival. I mean… come on! We are in disbelief. For years it has been a standing joke on our planning committee - “sure we should ask the Pope and the Archbishop of Canterbury”.

Indeed last week at our Directors meeting when someone said “well if we are starting the Festival with the Pope and ending with the Archbishop…” I shouted STOP! Can you please repeat that sentence and poke me in the eye so that I know that I am not dreaming!

Can I just make it clear. Pope Francis will not be in Belfast on January 30th in person. However he has sent a message to the Festival and that message will be how we will begin our 10th Anniversary Festival.

Now, I hear you asking, how did this happen? Well, I shared a few weeks ago in my BBC Radio Ulster Thought For The Day how God has blessed us in our short 10 year history by opening doors and sending resourses we could never have dreamed of when we started. This is perhaps the biggest of such stories.

Early on in our planning for our 10th Anniversary Festival we hoped and prayed that we might get the Archbishop of Canterbury, Justin Welby as a speaker. David Porter Chief of Staff and Strategy to the Archbishop was a founding member of ECONI (Evangelical Contribution On Northern Ireland) at the height of our Troubles and knows our situation. He has indeed spoken at a previous Festival. David was our link and we are so thankful the Archbishop agreed to come over.

Truthfully the only way to balance that in denominational terms was the Pope. We didn’t even try! However, about a year ago Máirtin Ó Muilleoir asked me to review the Pope’s latest book Let Us Dream. I did and loved it. Some of it resonated prophetically with our divisions here in Northern Ireland.

Talking about it at a planning committee someone said that Austen Ivereigh had written that book with the Pope. I had no idea. Before long we had asked Austen to come to the Festival to speak about the book. He agreed. When Fr Martin and I Zoomed him he even suggested he might get us a message from the Pope.

Fr Martin and I smiled at each other but dared not to dream I mean… come on!

Well, last week, Austen was with Pope Francis discussing another book and lo and behold he sent us a message from the Pope. Now, I am a Presbyterian from Ballymena but even I understand that this is a big deal. Even I am excited. Fr Martin has had the widest grin on his face for days!

Like all good TV dramas, I do not want to give spoilers on the message. It is very warm and he commends the purposes of the festival, his love of Festivals in general and his delight that the Archbishop of Canterbury is speaking.

If you want to be there for a big moment for 4 Corners Festival, and indeed in many ways for Belfast, then Pope Francis’s message will be the opening of our Festival, on the evening that Austen Ivereigh speaks about the Pope’s book in St Anne’s Cathedral on January 30th.

It seems prophetically symbolic to what 4 Corners Festival are trying to do in bringing Belfast together, that the Pope in an Anglican Cathedral opens our 10th Festival and the Archbishop of Canterbury in a Catholic Cathedral brings it to a close on February 6th.

Absolutely awesome! Last year was my first experience of the 4 Corners Festival and I can't wait for the blessings that this 10th anniversary one has in store!

I am delighted for you Steve and it is a tribute to the Festival: many congratulations!
In an earlier post I asked (but did not get a reply) whether it was an oversight or intentional that there has not been any mention in your publicity of the fact that the Festival opens on exactly the 50th anniversary of Bloody Sunday. Would it not be part of the Christian ethos of the Festival to at least make a reference to it as an act of solidarity with the families of the victims and the traumatised Bogside community in general?
Here in Cambridge we will be marking the occasion with an exhibition called "Art, Conflict and Remembering: the murals of the Bogside Artists" hosted by St. Paul's church. There was a fantastic interview with Tom Kelly, one of the three Bogside Artists, today in the newspaper the Cambridge Independent where he talks about the Christian message behind the murals as a way to examine what people have done to each other. The exhibition invites honest reflection on a moment in British history that cannot and should not be forgotten and I hope this will also apply to your Festival.
For more about the exhibition see www.bogsideartistsexhibition.org