Home Archives Profile Subscribe
JAMIE DORNAN - IS LOSING YOUR MEMORY A GET OUT?
THE OPENING NIGHT OF THE 10TH FOUR CORNERS FESTIVAL - PREVIEWED! 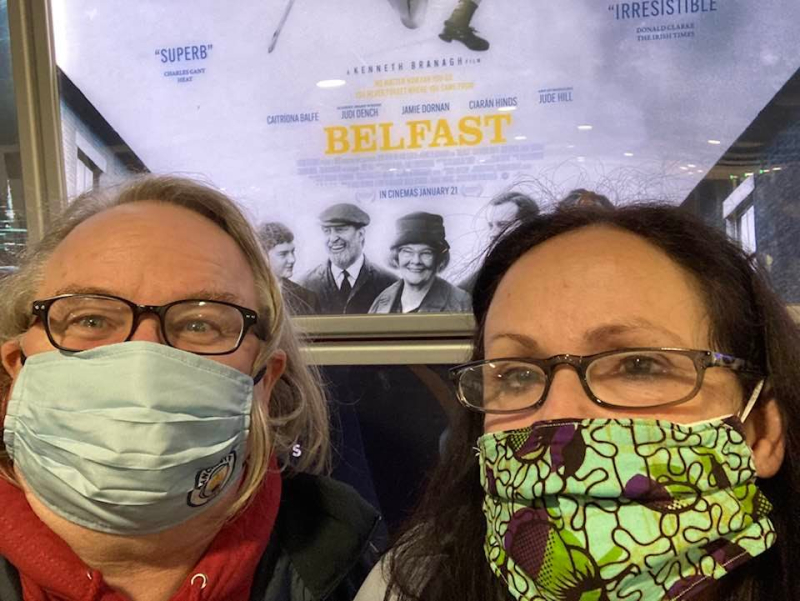 I was around 8 years of age. Sitting in the back of my dad’s Ford Cortina I overheard my dad tell my mum that she had to check that they had £100. My paranoid 8 year old mind kicked in. Why? Does dad need to pay a fine? Will he go to jail? Or were they thinking of moving house? The overthinking of a child when your whole universe is the inside of that  car.

It seems to me that that is what Kenneth Brannagh has done in his movie Belfast. For those who go expecting a movie about The Troubles, who expect more violence, who expect more political intrigue. Go see Omagh or Bloody Sunday.

Brannagh’s Belfast is as he remembers it as a child. This is the world through the eyes of a 9 year old. Buddy’s entire universe is his terraced house, his family, a few streets in north Belfast and his classroom. Like me as a child, he is a little paranoid about his dad going off to work in England, his Granda's illness and whether his parents might move him away from all he knows.

More sinister characters and events have just entered the Belfast landscape but they are not understood by a 9 year old as we clearly see when caught up with the wrong gang he looted a box of Omo washing powder from the local Stewart’s Supermarket. When his angry mother asks why he can only say, “It’s Biological!” Speaking to a friend we both remember at that age when Biological Washing powder was all over TV advertisements!

Belfast needs understood for what it is. It six months in the life of a 9 year old, as 1969 turns to 1970. His safe street shakes to riots and barricades, his grandpa is dying and his father and mother are wrestling over whether to make a new start in England, then Belfast can be seen as almost a poem to innocence too quickly becoming experience and trauma. It will be a little sentimental. Of course it will. Think back on your own childhood!

If we see Belfast as that poem, a personal ode to the city of Brannagh’s childhood then it can only be seen as an utterly beautiful movie. Filmed in black and white and often in wide lens Kenneth Brannagh has produced a love poem not only to Belfast, but his childhood and built it all around the love stories of his parents and grandparents. The resilience of Belfast's people is shown in how normal life continues and their humour goes on as abnormal threats start to change the atmosphere.

When the credits ended I was bursting with love. Love for my city and my wife. I walked to the car amazed that our wee place had given the world the cinematic genius of Kenneth Branagh and the musical genius of Van Morrison, whose songs fill the soundtrack pricisely placed. They really are the spirit of Belfast made music and help us all forgave him for his Covid talking nonsense! Ending with The Healing Has Begun... yes!

Then there is Jamie Dornan. Perfectly cast in his hometown. Ciaran Hinds is superb playing at home too. Judi Dench struggles very occasionally with the accent but she is so like a Belfast granny that she more than compensates. Dublin born and Monaghan raised Catriona Balfe rises to the occasion as Buddy’s mother. Jude Hill as Buddy is simply astonishing.

For a 9 year old to carry a movie is tricky. He does great with his lines but it is his facial expressions of shock and fear and sadness and love. Surely an Oscar!

My daughter told us to bring our tissues. I got through pretty well until at the very end as the credits are ready to roll Brannagh dedicates the movie to “those who stayed” “those who left” and “all those who were lost”. Like Buddy’s dad in one of the last scenes Brannagh is uniting us. He takes no sides because a 9 year old probably couldn’t or shouldn’t. He includes us all. A tear seeped down…

Steve, I couldn’t agree with you more. KB has done a fab job capturing many of our childhood memories. Hop Scotch, Subbuteo and the outhouse complete with loo squares all transported me back to the 70’s/early 80’s.
When I read the dedication at the end, as “one of those who left” back in 1990, the emotion unexpectedly crept up on me, the floodgates opened and I found myself uncontrollably bawling my eyes out. Great cast, excellent sound track but then I have always been a big fan of Van - and that closing track, one of my favourites, was the balm that I needed to soothe my soul 💗

Steve, you have summed up my feelings for this film beautifully. I was 11 in 1969. The film brought back memories that I had buried. I went to see it with my husband and daughter. Brian and I cried during the credits for lots of reasons , for the things we witnessed and went through, for the people who stayed , for the people who left . We were ones who stayed and experienced in our young teens what now would be described as trauma. My daughter cried for us , she had no idea as children what we went through. I love Belfast, I love Northern Ireland, I love the people who left and the people who stayed, my heart breaks for those who lost loved ones.
There was so much depth to this film, you have articulated it so well. Thank you and thank you Kenneth Branagh.

Once again you have articulated my sentiments so well. It is interesting to hear of others who had the same experience of delayed emotion. During the film I often had a moist eye but it was on the walk back to the car that the flood gates opened and I couldn't speak for quite some time. They were happy tears though, borne out of gratitude for how fortunate I have been. Fortunate to have grown up where I did surrounded by grounded people and love, free from famine, drought, earthquake. The film reminded me of what really matters.