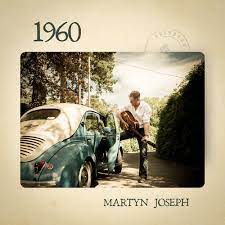 I used to say that if I wanted anyone to know what I believed about all of life then I would take them to a Martyn Joseph gig. His politics and  spiritual journeying seemed to reflect my own life’s outlook.

In 1960 Martyn is writing and singing my life again. Though born the year before me this is very much an album of reflecting on being 60. Martyn’s accuracy at reflecting my own refections is uncanny. More obvious would be his sadness at being Born Too Late to enjoy Joni and Crosby, Stills, Nash and Young but that his dad drove a Renault too… come on!

What we have here is a memoir in songs. Yet it is a memoir of the head and the heart and the soul. There is a lot of vulnerability and honesty. I love the almost prayer-like posture of Trying To Grow where Martyn confesses to feeling at times a fool and a fraud but longs to be transformed. I know the feeling exactly, my friend.

There is also great gratitude of life in Felt So Much and love particularly in Everyman-like song We Are Made Of Stars and In My Arms. Shadowboxing is all about his father’s dementia. Beautiful, poignant and sad. Again I empathise.

Martyn jokes on stage about writing miserable songs and there certainly is more misery in his body of work than any top 10 pop act of the 21st century but don’t be deceived. 1960 has its share of the shadowy darkness but there is hope in abundance. This is about the changes in life either intentional or terribly thrust open us and how we live and love on through.

Hope is where it ends. There Is A Field gives Rumi melody. The idea of a field beyond time where all is peace and justice. I learned it from Colum McCann’s novel Apeirogon and then found out that it was an idea that the late Northern Irish and Nobel Peace laureate John Hume loved. Martyn follows it with more hope and light and love on This Light Is Ours.

I get the feeling that a worldwide pandemic sending you into lockdown as you write an album on the first 60 years of your life might have given time for more thoughtful reflection and more care of craft on 1960. In lyric, arrangement and production Joseph gets this one just right.

The quiet nature of the piece beautifully mixing acoustic guitar and piano. The lovely echo vocals on We Are Made Of Stars. The gospel feel of Down to The Well and the Cockburnesque guitar driven rhythm of Under Every Smile keeps it gently shifting. The hidden track cover Witchita Lineman is sublime.

I have been listening to Martyn Joseph albums for over half of his and my lifetime, reviewing the vast majority and for me this one is as perfect as it can get.