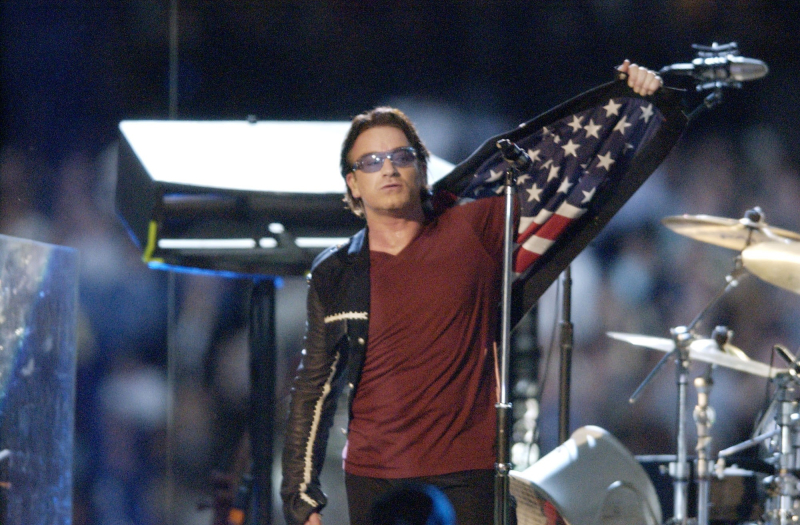 (this is an edited extract from book Walk On; The Spiritual Journey Of U2)

America was in shock and mourning. Rock concerts were cancelled. It was no time for celebration or partying. U2 had another leg of the ‘Elevation Tour’ planned. What should they do? If U2 were about celebration and partying then they would have had the sensitivity to forget the tour.

But U2 are about much more than that. The goal is indeed soul and there were souls in need of healing. U2 were confident enough to believe that they had something that might be of help for this particular moment. So they put tickets on sale and on October 10th they were back on US stages.

Bono would tell Rolling Stone that he felt incredible and humbled to be on tour in the US at this time. For the band it was a message to the world that they would not be frightened off. There was also a belief that music could change things. Songs reinterpreted in the light of the event was one thing but how would the band reinterpret those songs in the live setting to move from the band prophetically raging against American arms in the summer to throwing their arms around that same country with pastoral compassion in the fall.

There is no doubt that on the stage at that first gig in Notre Dame University, South Bend, Indiana there is cautiousness to particularly Bono’s approach. The only gig on the entire ‘Elevation’ jaunt that did not begin with ‘Elevation’ the band looked nervous and uncertain as they came on stage…

Bono leads a few repetitive lines of the heart is a bloom and shooting up through the stony ground before Beautiful Day finally comes in. It is the opening prayer for this leg of the tour. The band are indeed on the stoniest ground on earth. American streets are rough terrain and many of the nations loved ones have just been buried beneath it. What the prayer must be is that the heart is eternal and can burst through to bloom again.

Bono often walked around in sober steps like the priest has entered the Wake. He is gentle in his eye contact. He looks with sympathy and sadness. It is a man who wants to say “sorry for your trouble” to an entire nation and bring some comfort. There are more eyes raised to heaven in search of belief, more head in hands of disbelief.

‘Until The End Of The World’ comes across as a battle of good and evil and ‘New Years Day’ is about new birth, the heart a bloom, breaking though to live in hope of another a brand new time. America and the world needs born again.

A cover of The Three Degrees ‘When Will I See You Again’ with its waiting and suffering took on new spiritual depth and power as it introduced ‘Stuck In A Moment’. It is faltering in emotion, Bono’s voice breaks. There is recognition of the plight and hopefulness of the time passing. At the end Bono says, “Wow” as the crowd cheers. He looks pensive in poignant mood and for Bono speechless.

As he is about to make comment he thinks better of it and asks Edge to start Marvin Gaye’s ‘What’s Going On’. It is perfect for U2; political, spiritual and personal. With the too many people dying and crying and a conclusion of war not being the answer it was another song that hauntingly could have been written for the time. U2 use it well as an intro to ‘New York’.

‘New York’ was a beast of a song. It already had a few heads and another ascended out of Ground Zero on that Tuesday morning. Originally this is a song of a man sorting out life’s priorities. The placing of it in the first leg of elevation between ‘Gone’ and ‘I Will Follow’ bares this out.

It is a song about the speed and madness of the city but ironically it is also a song about Bono purchasing a bolt hole right there in the eye of it’s deafening and blinding hurricane. The fact that he bought a place in New York was now not a wealthy boast, that could be interpreted by a resentful fan paying over the money for a concert ticket, but an action that made Bono one of the mourners. He was one of them. It was a statement of pride. This is my city. These are my people. I want to celebrate the wonder of a city that others could dare try to destroy. Against their violent hate I stand strong and proclaim my love as an act of no surrender. There would be a paraphrase, “In New York you can’t forget just how strong the city’s will.”

It is the U2 song that changes most post 9/11. There is a specific change in lyrics to mention September’s and summer’s love turning to winter’s rain and the Titanic lifeboats are no longer a personal carrier for Bono but invoke thoughts of real panic stricken emergency and the new New York heroes the fire fighters who gave their lives to try to save lives.

The earlier mention of cell phones also becomes more poignant, no longer a negative image for a world where all communication has to be frantic and immediate but as a means to reach those who we love and find out if they are alright or even send a last message of love before we jump from the 93rd floor. The lines of diversity between races, religions, religious nuts and political fanatics are given a new take too. It is no place now for the fanatics but still a place for abounding tolerance.

By the the tour reached New York the hesitancy of South Bends had been left behind and they were in full flow again, aware that they were indeed bringing something soothing to a nation in raw grief. ‘What’s Going On’ and ‘New York’ are pushed back towards the end of the set. They follow ‘Bullet The Blue Sky’ which was dropped for the first Notre Dame concert but returns altered to remove the rage but to retain the provocation. America has been attacked and badly injured so the pastor stops pointing fingers but in the embrace there is still the warnings of revenge and war and their continued if not increased futility.

It is ‘One’ though that takes centre stage in New York. It has been muscling up the entire second leg. It is where Bono has been doing his preach about how his passionate Third World debt campaign and desire to eliminate poverty is intrinsically linked to the events of the past weeks. He has been likening the religious fanatics who hijacked the planes to the IRA terrorists of 70s and 80s Ireland.

Just as U2 were Irish that did not mean they were terrorists, so we should not look at every Muslim as a killer. ‘One’ moves from some heart breaking love song to a song of world peace of the carrier and the carried, everyone together getting us out of this moment and walking on.

As they sang ‘One’ in New York the names of the 9/11 victims are scrolled across the big screens in an emotional realization that these are not statistics but human beings who lived right here in this city. He ends with a conversation with God, “did you hear them coming Lord…” which is a perfect lead in to ‘Walk On’ with it’s place in the waiting room between earth and heaven. At the end of the third night at Madison Square Gardens 50 fireman walk on stage to dance and take the applause of their fellow New Yorkers. Bono has been going on about real heroes, how selfish pop stars are not and how firemen have shown us who really is. With all things U2 this entire exercise lives on the thin line between sickly cash in caricature and cathartic healing. There are some who would be repelled by it but they were few and far between. Once again U2 do the emotional not for show but for a deeper healing.

If those attending gigs were reached during the tour then the entire nation was given an invitation to the wake on Superbowl Sunday. The first achievement of this night was to create the buzz of a concert in 3 songs; half a minute into ‘Beautiful Day’ –job done! As a result of the brevity of the performance they pumped the celebration in that one song before turning on lament in the mournful MLK as the names rose into the Louisiana sky.

Then it was the hopeful yearning of a place where the streets would have no name. This was a microcosm of the tour. Bono would make a lot of America being a soul nation during ‘Beautiful Day’ and here into the heart of it U2 pastored the flock. It was never the intention when the tour set out almost exactly a year previously but it had been effectively achieved from the only band who could possibly have reached deep enough inside to deal with the hurt of so many.