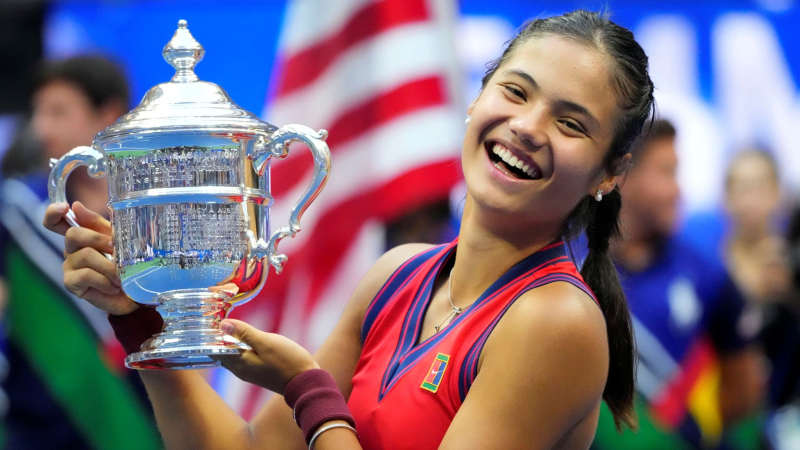 Emma Raducanu? What? How? Extraordinary.

I think on this side of the US Open it might be easy to downplay what 18 year old Emma Raducanu just did. Tim Henman kept saying, “it’s a joke”. He didn’t mean funny haha. He meant weird and bizarre and unbelievable.

Tim knows. Years and years of trying and he never won that elusive Major. Andy Murray knows because of how long it took him to break Britains 70 plus years without a Men’s Wimbledon title. British tennis fans know because it was 44 years since Virginia Wade won Britain’s last women’s Major.

Yet, here is Emma. Doing her A levels in June. Getting to the second week of Wimbledon where she wasn’t beaten on the court but by something physical and had to retire.

Here’s her second Major. She had to qualify. So, in three weeks she played ten matches. Won them all and didn’t lose a set. Not one set.

We do remember she is only 18. Yet, from nowhere this young girl arrives in the international tennis world as a complete package. She has all the shots, a tactical mind, a mature choice of shots and a composure of cool. She’s an athlete too.

So without all the years of work she just goes right to the top of her sport. In a few weeks. It is indeed a joke. A ridiculous idea. Almost unbelievable if we hadn’t watched it with our own eyes and her name hadn’t been inscribed onto the trophy.

It was quite the final. If Raducanu is a teenage wonder, she isn’t the only one. Her opponent Leylah Fernandes is a Philippine fighter out of Canada who has heralded her arrival on the same world scene. Tennis could do with these teenagers becoming the Federer and Djokovic of their era. More finals like last night’s would not go amiss!

Both players showed a maturity beyond their years. Yet, at the crucial and controversial moment Raducanu had a little more. An unfortunate cut with blood running down her leg at 30-40 as she served for history might have been seen as a blessing in disguise as a time out gave her a chance to compose herself. As she said though she had to get back up and serve a break point down. Fernandez unfortunately let her disappointment cause her to lose composure. Mental win for Raducanu… and the match… and championship.

It was a Fairytale in New York, She was so astounding at Wimbledon that I wondered against my own rationale that she might actually win it. In New York she has. What happens now is going to be interesting.

If she keeps her head and doesn’t get injured the tennis world and every possible record is at her feet. It is hard though to keep her intensity for 10 years never mind 15. She’s also a millionaire overnight and her talent and title and smile are a sponsor’s dream. She’s is going to have to deal with the money and fame - fast. Let us hope that she can.

Finally, her teacher. You know they old story. “Emma you need to knuckle down and get grades. Tennis is not a secure career.” With no British Women’s Majors finalist in 44 years who’d blame the teacher. Well Madam… or sir… she just earned twice as much money in three glorious record breaking tennis weeks than you will make in your entire life. At least you have a story to share at parties!