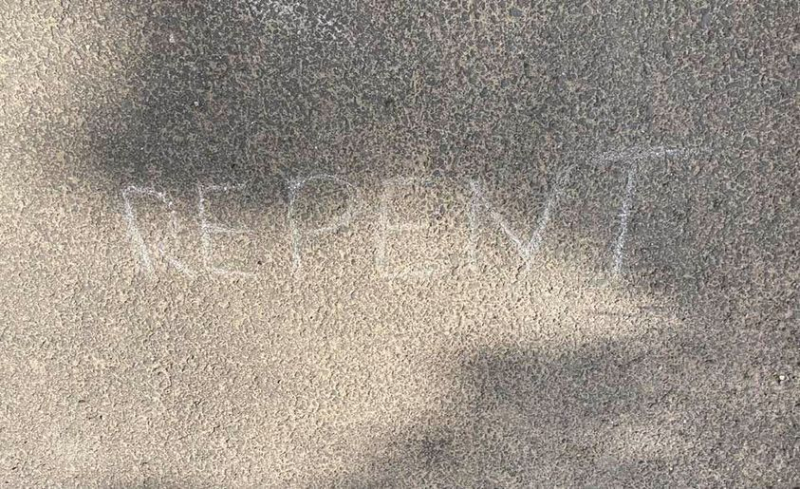 REPENT. At first it wasn’t so surprising. Random Biblical words appear all over north Antrim. Evangelical giants have been posting messages for centuries, higher up trees than Zaccheus ever ventured. “Eternity where?”

Walking over the scrawled word REPENT as we made our way to our favourite beach in Murlough Bay did catch my attention though. Maybe it was my more fertile holidayed mind but I started asking questions.

What did the scrawlers mean? Why did they scrawl it there? It got a little confusing as I walked on. The rest of their “pavement art” was not as philosophical or religious. Boys names and farm names seemed to have taken over from converting the world.

REPENT. It has all kinds of connotations in this particular part of the world. Conversion is usually the aim of such statements but what are they converting us to? That the “artist” thinks that this generation automatically fill their minds with an every Sunday churched theology when they see the word is a little out of touch with a post Christian society.

Anyway, what it might have meant to those who wrote it I didn’t really know. In fact I was being a little bit naughty to caricature what I thought they might have meant - “stop drinking, smoking and swearing and read your Bible and pray everyday”. Maybe I too am out of touch. Maybe it was just kids having a laugh!

Whatever, I started surmising the word in its Gospel context in Mark 1. Then all of the books I had been reading and songs that I had been listening to on this summer holiday started throwing up clues as to what Jesus meant by REPENT.

So, thought I, that might be a great way to start back preaching In Fitzroy this Sunday. A strong Gospel word, surmised with Scripture in one hand and all my recreational reading and listening in the other.

Sue Divin’s amazing novel set in Derry/Londonderry/Doire has a wonderful moment of repentance that will give the sermon a liturgical act of homework.

Sue’s book though is as much about Northern Irish society as it is about two teenagers falling in love. There are questions of repentance for us as a society too. Jackson Browne’s new album Downhill From Everywhere calls for that a societal and environmental repentance.

There are lots of other songs and book references and, beyond that, loads of little social media quotations coming together. The magpie preacher in me is full of buzz and imagination. Watch out on Sunday as I build a space for us to make big decisions with our lives. REPENT.

Fitzroy Sunday Gathered Service is at 11am and you have to book -  rclotworthy@gmail.com