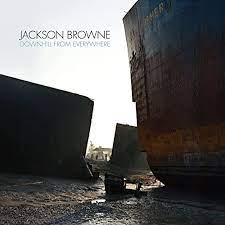 Almost 20 years go I wrote a book called The Rock Cries Out: Discovering Eternal Truth In Unlikely Music. My Publisher Relevant Books picked the name and I was happy with that. My working title was Secular Saints.

I argued that artists with no faith or at least with no Christian faith could say things that followers of Jesus could caress and collide with. Joni Mitchell, Kurt Cobain, Radiohead, Bob Marley and George Harrison were among the final choices.

Of course Jackson Browne was in there too. Indeed, if one single artist could have defined for me what a Secular Saint was it was Jackson Browne. I am talking about an artist who’s music encompassed the personal and societal transformation that Jesus was on about in his incarnation.

From the very beginning of his career Jackson Browne’s songs bombarded the listener with introspective challenges and inspirations for heart and head and soul. He was also sharp with the social or political. I learned to think about social justice in the 80s with Jesus and the Old Testament prophets in one hand and Jackson Browne records in the other.

Downhill From Everywhere comes from a man who is for much alive in his world. He asks us all on Until Justice Is Real:

It's a good question to be asking yourself

What is well being, what is health?

What is illusion and what is true?

What is my purpose - what can I do?

Here is a man in his 70’s hearing the voices of God’s damaged creation and broken humans and seeking to encourage those with ears to hear to do something about it.

There are many questions on Downhill From Everywhere. It provokes soul and society. It walks through the valleys of shadows and always finds that light and inspiration to keep going in bringing something better.

Maybe one of the two songs on the record written about Haiti puts this best. In Love Is Love, a lifetime creed, of Browne tells us about Rick:

“Rick rides a motorbike through the worst slums of the city

The father and the doctor to the poorest of the poor

Raising up the future from the rubble of the past

Rick is a Catholic priest who came to Haiti after the 2010 Earthquake and realised that the people didn’t need a priest but a doctor. So he went home and studied to be a doctor and returned - “The father and the doctor”. It is that wow of love where hopelessness could reign that makes me love Jackson Browne.

I am also loving Human Touch, written with Leslie Mendelson who I heard a few years back supporting Deacon Blue and Steve McEwan for the film 5B about the first Aids hospital ward opened in America in the early 80s. McEwan has been a favourite writer of mine since his late teen days with South African band Friends Again. I loved his band Unamerican. He also wrote the very popular worship song Great Is The Lord. In Human Touch he provokes a self righteous Church and sneaks in a wee bit of 1 Corinthians 13!

There are so many good songs here. It is musically so vibrant and there are no fillers or anything half baked. It is an incredibly strong Jackson Browne collection. I might dare to suggest that it is up there with some of his best. Good music that is good for something. What Secular Saints do!