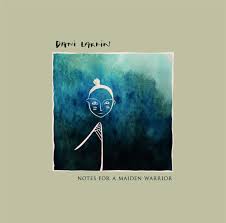 Dani Larkin is a young lady with some range.

Her debut record Notes For A Maiden Warrior has a historical range from the influence of ancient myth to personal pondering under Belfast’s Samson and Goliath, that plays poetically with Biblical text and modern Belfast context and adds Larkin’s own introspection. It’s pretty epic.

It has a musical range too, from Irish trad to John Martyn guitar driven early 70s folk to standing with Joshua Burnside in contemporary Irish song imagining.

Listen too with wonder at the range of her voice, which is a wow; it’s strong and delicate. Go to the closing Three Wise Women for more than enough proof.

Growing up on the Armagh/Monaghan border Larkin was steeped in the traditional Irish music and story. I particularly love the way she has taken that old traditional folk song structure and played with it creatively, making something new, without losing the essence. Too many of her peers have deconstructed too much without bettering in their reconstructions.

The Nordy magazine Dig With It review tipped me off to Dani Larkin and the more I have listened this summer, the more I have come to love it. It impresses on first listen but it reveals itself with every listen. I cannot see it being far from the top of my best of 2021.