MY LONGING TO EXPLORE GOD 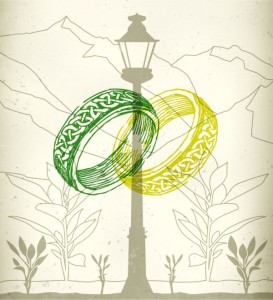 I didn’t want my soul to be saved from hell as much as I wanted to know God. God. Imagine that. God. I couldn’t. As David Gray said, probably not about God, “we are trying to spell what the wind can’t explain”.

The first step of following Jesus for me was a leap into the biggest adventure that I could imagine a human can take. I was Jonathan Livingston Seagull, from Richard Bach’s short novel, wanting to fly like no other gull has ever flown… or human being had ever lived. I was seeking that “life in all its fulness” that Jesus invited us into in John 10:10.

As a seventeen year old I felt like Digory in CS Lewis’s Magician’s Nephew. In that, the first novel chronologically in the Narnia Chronicles but not first published, Digory and Polly find magic rings that bring them into Narnia through a dank pool. Polly wants to go back to safety but Digory says, “There's not much point in finding a magic ring that lets you into other worlds if you're afraid to look at them when you've got there.”

I believed that Jesus life and cross and resurrection was the miraculous act of God that had tossed me into this other world. I wanted to spend my life looking. I was mad keen to jump headlong into mystery and vastness.

It feels that what then happened was that they handed me a couple of books. Here’s all you need to know in this tome of systematic theology. God confined to a few hundred pages! Here’s another one about what to do and not to do. They told me it was very clearcut. Biblical they called it. There was no room for questions or doubts. No room for mystery for that matter. Adventure and risk seemed frowned upon.

Forty years later and I am still seeking more. More about God than was in the books. I am still seeking the Holy Spirit’s leading into what the Bible really does say. I am mad keen to find out what it sounded like to those who wrote it and heard it for the first time. I want to know where our cultural lenses over 2000 years have shaped it, perhaps wrongly. I find a lot of wrongly!

Oh I know that my cultural glasses will make errors too. I am aware that I might shift the swing of the pendulum too far. But I am not into this for some safe sitting around at the corner of the stagnant pool talking about the colour of the magic ring or I how held it to get in. I want to step out beyond. I am up for the daily dynamic of the dilemma that is discipleship in a mad crazy 21st century world, not simple do this and do that following.

So, in this week that I have been given to reflect and read I am reading about the culture of Jesus day, about how the Bible works and how to preach better. The preaching is why I was born, my reason to be magiced the rings, my place in this vast ginormous kingdom that I am still exploring daily.

None of the books might be deemed to be safe in certain theological jurisdictions but as CS Lewis also said, “Aslan is not safe but he is good.” Aslan, he also said, was on the move and I am up for the chasing after!

If I am honest the hardest thing for me is to claim is to be a Christian, I am a deep thinker particularly when it comes to theology, but I just feel there is just too much of a disconnect between what I believe and how I live what I believe. I think Kierkegaard image sums it up of two people concealed under a cloak in which one speaks and the other acts, without any relation between the two. That how I feel, don't get me wrong I have a faith, but I wonder is that enough, and I do struggle with the whole church side of things, which I just find deeply irrelevant most of the time. I just find it so hard to understand how we turn Christianity into something that is so irrelevant to so many people, when the message Christ preached was nothing but liberating, radical, transformative and most of all loving, but then if we really were to follow Christ it would be the hardest thing in the world. To turn the other check, go the second mile, love your enemies, if we did live just imagine how the world would be changed. I don't know if you have ever watched the film Of God's and men, but that is a film which illustrates what it really means to follow christ, if I ever get close to those ordinary men then I would be happy to claim I am a Christian.