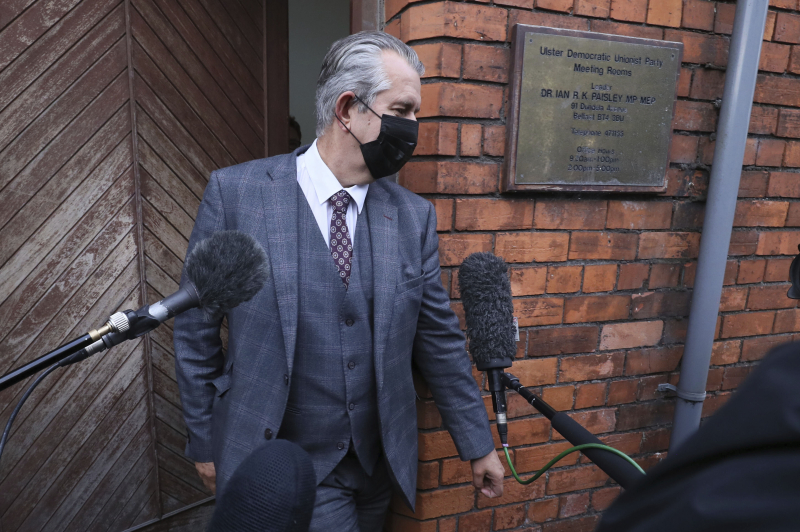 Allow me to use a Surmise to unpack all this DUP drama!

In November 2014 the Clonard Fitzroy Fellowship had Mike Nesbitt, then leader of the Ulster Unionist Party, speak at Clonard Monastery. That night, just off the Falls Road, an audience with a majority of Nationalists and Republicans told Mike that the Union was safe in their lifetimes and that he should stop worrying about borders and get on with issues like health and education. Mental health was particularly high on the agenda.

Less than seven years later and that Union is far from safe. It is astounding to realise that Nationalists and Republicans have done very little for that to cause the turn around. Unionism, mainly the DUP have unraveled their most precious Union almost single handedly.

RHI, Bexit, snuggling up to Theresa May and being betrayed, believing promises of Boris Johnston and getting shafted, a goods border in the Irish Sea and the protocol confusion with it. It’s not been a good few years for the DUP.

Their support for Brexit becomes more and more unfathomable with every passing day. Northern Irish voters had a clear majority that wanted to Remain. That the DUP put voters in England and Wales above their own. That has not go down well. There are very many unionists with a small u, particularly the younger age group, who see themselves as Europeans with a capital E. I wonder what the percentage increase in Protestants with Irish passports!

Ireland was nicely settled and compromised in the EU. North and South flowed back and forward in a way that the border was a lot less of a barrier. In many ways Ireland was pragmatically united while Northern Ireland was still part of the UK. That had become almost palatable to those talking to Mike Nesbitt at Clonard.

Brexit unraveled all of that. Borders were important again. Pragmatisim was jettisoned for old idealisms. Like the Nationalistic English, who seemed to see Britain as some Empire who still ruled the waves, the DUP thought we could free themselves again from a Rome Rule Republic and all its poverty. Except that there was no longer an Empire and The Republic Of Ireland was no longer Catholic or a developing country. Unionists had been enjoying Dublin and elsewhere across the 26 counties for thirty years. Unionists with a small u were no longer frightened of Ireland and were a whole lot angry with English nationalism.

As Alliance and even the SDLP started stealing small u Unionist votes the DUP have not responded. Getting unceremoniously rid of Arlene Foster and electing Edwin Poots as leader seemed like a return to an even older and tighter hardline. Then when we thought he might play hard ball with Sinn Fein over the Irish Language they seemed to compromise.

When they do, those we thought were the softer line DUP revolt and oust Poots who hadn’t even got his seat warm. Now it looks like Sir Jeffrey Donaldson will be leader of a party that it was thought he might resign from in a week or two’s time. You couldn’t make it up.

And the Union cracks a little bit more as former Unionist voters and new voters are exasperated. What next? Donaldson going harder than Poots? Chat that he would bring down the institutions at Stormont as Sinn Fein did in 2017 might be the next bad move. An election just now might well get their hardline voters behind them but if they have haemorrhaged even more of the middle ground they might return with fewer seats than Sinn Fein.

They need to also take seriously that Alliance and the SDLP have uncovered good politicians and even the Ulster Unionists look a little stronger under Doug Beattie and a stand out performance by Robin Swann through Covid-19, no matter what Van Morrison and his mate Junior suggest!

Maybe after all the coming and going and drama of the past month we should return to the leader before it all went mad. Arlene Foster’s Tweet during the 12 hours of Edwin Poots meteoric rise and fall that she hoped everyone was having a lovely day was acerbically hilarious.

More poignant and prophetic are some of Foster’s final words in the Chamber when she resigned as First Minister, “We can poke each other in the eye and have a competition of ‘my identity is better than yours’ but it is only by respecting each other’s identity that we will move forward.”

That would be a sensible, pragmatic lead to take, whoever turns out the leader of a party that seems very much bullyingly led by its followers and voters than its leader.

Mind you when God gave out pragmatism, the DUP seemed to think he said paganism and asked for absolutely none! In the same handing out instead of self reflect they thought God said genuflect and they were having none of that.

Let us of course not point fingers without fingers pointing back. All have fallen short and continue too. We all need grace filled pragmatism and Holy Spirit searching for self critique. The DUP's current drama is without doubt making a rocky local government even more rocky but everyone of us in Northern Ireland need to move away from century old idealism and ask how our Britishness and Irishness makes sense NOW and how the two can come together to make common ground for common good.

As an old-school socialist I don't have much time for the DUP but I have to admit I wince a bit at this kind of commentary.
It seems we're creating a neo-sectarianism that can only make our society worse. Repeating past mistakes with a new target group.
None of the Stormont parties have clean hands (politics seems to be intrinsically dirty) , and the EU hasn't exactly shown itself in a good light to put it mildly, so laying the blame on one group is deeply unfair.
There's no doubt we deserve better representation, especially now when we're caught between two intransigent power blocks in the midst of a pandemic, and focus isn't on health or education but... The Irish language.
Maybe we all could do with a bit of self reflection.