EDWIN POOTS AND THE BIBLE 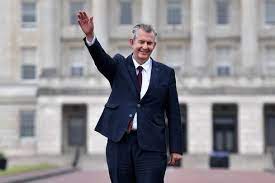 The new leader of the DUP, Edwin Poots has written some headlines across Northern Irish politics in recent weeks.

One of the big talking points has been his views on the age of the earth. Edwin is from a group that thinks you can measure the age of planet earth by Biblical genealogies.

It is an interesting idea. If you take that approach then you can make the Bible say that. The vast majority of Christian Theological Colleges would not hold such a hermeneutic.

It might make Edwin Poots a little out of kilter with robust theological studies but he has the right to hold whatever view of our origins he gets from his way of reading Scripture.

Personally, I have never been too worried about the beginnings of things. God was there, I believe, from my reading of the Bible. The technique and science isn’t spelled out.

I often think if a car is driving at me at 90 miles per hour, just fifty yards away, that I am not going to stop and ask, Vauxhall? I wonder if was built in Ellesmere Port? What model is it? I wonder where the rubber for the tires came from? I think I’ll deal with now and get out of its road!

Which has me surmising. What if Edwin Poots’ faith was not caricatured by what he believes about the age of the earth but about his passionate love for his enemies.

I could quote Luke 6:27-28, as I often do about this - “But to you who are listening I say: Love your enemies, do good to those who hate you, bless those who curse you, pray for those who mistreat you.” But actually any kind of understanding of the Gospel of Jesus, no matter your hermeneutics leaves no question that loving enemies is what they entire thing is all about.

Back in those Genesis beginnings humanity makes enmity with God. Humanity breaks the relationship. BUT… God loves. God moves. God acts. Grace it is called. Without anything worthy of God’s love, God loves his enemies.

Indeed to bring justice God stands in for the crimes of the ones he loves and forgives. As Philippians 2 puts it so poetically: - “he humbled himself, by becoming obedient to death— even death on a cross”

Jesus then asks us to follow him. In his teaching on our following he was never distracted by the age of the planet. He was always so obsessed by a new Kingdom on earth like heaven where we would love God, neighbour and enemies and love to a sacrificial level.

It is hard to miss this radical Gospel however you read the Bible. So… though Edwin Poots has every right to have different notions of the earth’s age I find it sad that it is not all over the press and radio and TV that the man is mad because he loves his enemies, those who have ill treated him. That would be something.

As soon as you move from praising God for his creation to insisting it took only 144 hours, you completely miss the point.

Do I believe God could have created the world in 144 hours? Yes, of course he could, but the evidence says he took his time over billions of years to make it very good.