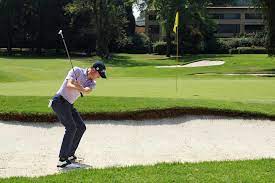 My body shuddered. My mouth was agape. My eyes like saucers. I was shocked.

I was watching the golf on TV. It is the USPGA this weekend, from Kiawah Island in South Carolina. For some reason there is a local rule that allows players to ground their club in sand.

Since I started playing golf as a six year old it has been drummed into me by my father that you cannot touch the sand in the bunker. That means you cannot ground your sand wedge behind the ball. You cannot touch the sand in any way. In fact there is a mythical old tricks of dropping 50p in the bunker. When your opponent picked it up you could claim penalty shots against them!

So, I am watching the now second Major of the year and this guy takes two practice swings in the bunker, lifting sand with each swing. It was like my inbuilt mother board exploded, not able to compute what I was watching. It was like my body gave a little jump.

Apparently it is unique to the Kiawah Island course. Some sandy areas are not defined as bunkers, therefore not hazards, therefore you can build sand castles if you like!

It took me by surprised, how shaken I was. I almost didn’t breathe until the commentator explained.

So, I thought, what would be more crucial things for me to shudder at? My life had obviously been so wired to the rules of golf, even though I haven’t played it for some twenty years, to set off alarm bells when someone did something outside those rules. The ways of golf were so deeply ingrained.

Christian Discipleship is about a way of life being deeply ingrained. My mind scanned the pages of the Scriptures and settled at Colossians 3:16. “Let the word of God dwell in you richly…” Like those rules of golf indwelling, long after I needed them, the reaction I had needs to be replicated in my spiritual life.

When I see in the world, or maybe more crucially in myself injustice, racism, sectarianism, greed, selfishness, abuse of power, arrogance… my body needs that shudder, that mouth wide open, those eyes wide open.

Yes, I was taken aback as well, yet, after the explanation I was able to not shudder as I saw it several other times during the weekend.

Our ministry www.golffromtheheart.golf is attempting to gather Believers who have a passion for golf to grow community together while engaging in the Word together. We believe that presenting the "Good News" on a regular basis and engaging with others through our communities we can encourage golfers to become Disciple-makers as well.

What do you think?