CITY LOSING TO CHELSEA AND MY COINING THE PERFECT TEBLE 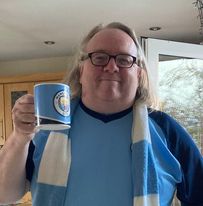 I think more people asked Janice how I was than actually asked me. I was thankful for the gentle sporting engagements people gave me. I believe that good sportsmanship is a value of following Jesus. I have no time for acerbic bipartisan football “banter”.

Anyway, I am fine. Football is a funny thing. It is all about 90 minutes on one evening. The ecstasy of winning is intense and then quickly disperses. The heartache too. Also, it was a one off game. Anything can happen. We lost a recent Cup Final to Wigan. I had grieved all day, preparing for the worst.

In those 90 minutes Chelsea were the better team for most of it. Their back 4 and defensive midfielders were superb. Kante, James, Chilwell and Rudiger - excellent!

City were beaten by their starting line up. Everyone but Pep knows that. No defensive midfielders and players had no idea where they were playing (think De Bruyne!). Pep talked all week about City needing to play like themselves then put a team out that couldn’t be ourselves. The Champions League has Pep’s head and two years in a row his over thinking cost us. We might win more domestically with Pep but Champions League? I am not sure.

As many of you know I am more up for more Premierships than Champions League anyway. So many of you try to convince me about how wonderful it is and how much we need it but for me it is just another Cup.

It is about 90 minutes. You don’t need to be the best team in your country to win it. Indeed Liverpool and Chelsea have won it in recent years without even making the English top 4! The Premiership is the best league in the world and you win it over 38 games. Give me that any day.

BUT… I will make you a concession. There is a way that I would love to win the The Champions League that might eclipse simply the money and prestige. I introduce you to The Perfect Treble. I have never ever heard it mentioned. It is, in my opinion, the Holy Grail of football.

That even Liverpool and United have only done this once makes me suspicious in the modern era that you can have a tilt at both. City were close but winning and keeping the mental intensity to win another Premiership and get through all the rounds of the Champions League - it is a big ask. And Pep if you have to compromise, concentrate on the Premiership!

Who knows, it might happen next season. However Tommy Tuchel is the real deal and Liverpool will be mentally strong again. That Perfect Treble is a long way off.

Twenty two years ago I watched in horror as City were 2 down going into extra time in a Division 2 Play-off Final. Thankfully we, for the first but not the last time, scored twice to turn it around. Today, we are Premier league Champions for the third year in four, fifth in a decade. We have also 2 FA Cups and 6 League Cups. In 2011 I would have taken one of each.

Even without a Champions League, consider me spoiled beyond my dreams. Tell them I am fine Janice. Very, very fine!