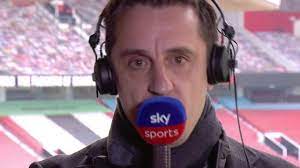 Gary Neville was a red. I was never a fan. I actually thought he was overrated too. One of the many players that Sir Alex Ferguson made look  a lot better than he was! I know. It is probably my City bias. I did love seeing him getting sent off in a Manchester derby!

As a pundit I have liked him more. I love the way that Sky have made their pundits a little partisan as well as having a general sense of fairness in their post match comments. Neville and maybe Jamie Carragher led that delicate balance.

Tonight though I declare Gary Neville a hero. A mere 48 hours into the setting up of a European Super League Manchester City and Chelsea are already opting out and Neville’s contribution in that cannot be underestimated.

Make no mistake that this is a sensational turn around. Even the commentators tonight are disbelieving at the early unravelling, thinking that these Super Rich teams would have seen out the storm.

For me this has been about wealth and big business and I have seen very little that has ever suggested that protesting ever works when the the rich get greedy enough. I wasn’t sure that the owners of these clubs had anything on their mind but a rise in the share price. Not much a poor customer has been able to do in the face of that over the last 100 years.

Yet, it seems that fans and players and managers have done just that. They have threatened the owners of their clubs with becoming socially reprehensible, like drunk drivers. They have made them think again. It is an extraordinary victory that should be cheered by every fan in every stadium much more than their team’s next goal, win or trophy.

Gary Neville’s contribution has beens seismic. On Sunday afternoon, a very short time after news of this Super League broke, Neville made a pundit speech that was up there with any political speech we have heard in recent years. He was articulate, argued well, nailed everything that needed said. It was emotional. It was angry. It was clear.

Tonight I have no doubt that that outrage and how it was shared set in motion an impetus that was picked up and run with by everyone who loves the English game. It set a tone. It shone a bright light. It was a depth charge hurled and ripples became  waves that crashed against the big soccer liners and sent them back to port.

We need more of the Gary Neville model in soccer. This war is not done if the victory in the battle can be heralded. More reform is needed. The game and the fans need to be more important than big business.

We need more of the Gary Neville model across the wider society. Where the greedy ride roughshod over the common man and woman we must vent our anger with articulate words and a joined up outrage.

We need more Gary Nevilles. We are seeing before our eyes that they can make a difference.