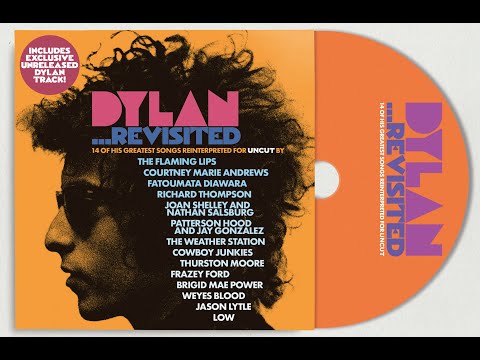 As Bob Dylan cover albums go this might be one of the very best. It comes from a strange source.

I hate free CDs with music magazines. CDs? Surely streaming has stopped any need for a few taster songs from top and coming albums. Mostly, they are not the best songs. Advertising money can be the only reason.

Yet, Uncut’s June 2021 free CD is a revelation. Just a glance suggests as such. I mean it only needs a glance for proof. Cowboy Junkies, Low, Courtney Marie Andrews, The Weather Station, The Flaming Lips, Richard Thompson, Frazey Ford, Weyes Blood… and more.

But even with a strong bill I can still be suspicious of these darn things hanging off front covers of magazines. My suspicions were well and truly smashed by a stunning collection of Dylan’s songs, tastefully done. Even better is that when they brought all these versions together with a certain

It is the female vocals that marvel most. Courtney Marie Andrews’s To Ramona, Bridget Mae Power’s One More Cup Of Coffee and Frazey Ford’s The Times They Are A-Changing bring a vocal purity that is surely beautiful and Low’s Mimi Parker is only a little short of angelic on the haunting requiem that is Knockin On Heaven’s Door.

There is a special world music shift in the African rhythms and harmonies that Fatoumata Diawara brings to Blowing In The Wind, an assured addition to our next Ugandan Bus Trip Playlist.

Most intriguing of all are The Weather Station and Cowboy Junkies. The former tells us that she has tried to strip away the Christian parts of Precious Angel, “I found a way to remove some verses and reorder others to make it a secular song”. Bless her heart but Tamara’s caricature of following Jesus is a little out of sorts. She might have removed Jesus but the Holy Spirit is still hanging all over what is still very much a prayerful spiritual.

Cowboy Junkies don’t have Lindeman’s seeming queasiness with Jesus and don’t tamper with the Holy Spirit in I’ve Made Up My Mind To Give Myself To You. The most recent Dylan song here, a blend of Make You Feel My Love and something from Saved they preach it in that gentle Canadian arrogant free way:

If I had the wings of a snow white dove

A love so real, a love so true

I've made up my mind to give myself to you

The other remarkable thing is that there is not one duff track here. Richard Thompson thinks he has nailed This Wheel’s On Fire better than anyone before him; The Flaming Lips do psychedelic country on Lay Lady Lay; Thurston Moore get’s closest to the original on Buckets Of Rain; Patterson Hood and Jay Gonzalez from Drive By Truckers bring an appropriate southern crawl and drawl then add a little menace to Blind Willie McTell; Joan Shelley’s purity on Dark Eyes with Nathan Salsburg on guitar; Jason Lytle’s stripped back strum and luscious lazy vocal on Most of The Time reminds how good a tune that is.

After all that the Musical Excellence Award goes to Weyes Blood for her 11 minute Sad Eyed Lady Of the Lowlands, starting in the same Americana ambience as everything else before building to a psychedelic baroque drama of the most beautiful climactic kind.

All this and I haven’t even mentioned that Bob appears himself in a rare track from the very fertile Infidels sessions. Too Late merged eventually into Food Of Pride and still didn’t make the cut. Here, it is an acoustic lash, echoing Dylan’s early Greenwich Village days and has all the lyrical intrigue you would like.

This does deserve an official release but if that doesn’t happen, get yourself to a shop now and buy Uncut June 2021 and make sure that infernal free CD is attached!