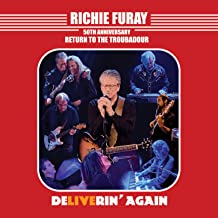 I came to Richie Furay through his solo record I’ve Got A Reason. It was an Album of the Month in a Christian Record Club! I loved it because it wasn’t the Jesus-per-minute formula of the most of the catalogue. In Furay’s songs, faith was all submerged in the everyday, as I so much prefer.

I then found a Souther Hillman Furay Band record in a bargain bin. I suddenly realised that Richie was a rock star legend. Mr Furay was  one of the three main voices behind Buffalo Springfield with Neil Young and Stephen Stills. He was also a founding member of Poco, almost a feeder band for their contemporary country rock mates The Eagles.

Richie Furay is one of the few Church pastors who is a member of the Rock N Roll Hall Of Fame. Since 1983 he has been pastor of Calvary Chapel in Boulder, Colorado. He has kept the music going with worships albums, records of the same kind as I’ve Got a Reason - The Heartbeat Of Love and Hand In Hand - and a brilliant live record Alive.

This new double album with the succinct title of Richie Furay 50th Anniversary Return to the Troubadour or preferably DeLIVERrin Again is in musical terms a follow up to that Alive record.

Furay has built a beast of a beautiful band around himself. Scott Sellen’s guitar playing is exemplary, Richie’s daughter Jesse Lynch brings strong vocals and current Eagle, once of the Poco parish Timothy B Schmit also makes a guest appearance. Dave Pearlman also guests with delightful pedal steel and dobro.

The evening and album is devided in two. The evening’s raison d’étra is to replay the entire Poco album Deliverin’, the band’s third record which was also live. It is the second half of this set and brings that 1971 record alive with a crisp vitality.

Before that DeLIVErin’ Again set we get Still DeLIVErin’ which makes a powerful statement that Furay is still writing great songs while he also pastors his flock.

We scan the last twenty years of Furay songs and some of his most recent like We Were the Dreamers, a biographical song about Poco, Wind Of Change and Someday sit perfectly confidently alongside Buffalo Springfield’s On The Way Home and Poco favourites not on Deliverin’, like Go and Say Goodbye and Hard Country, the latter featuring Jesse Lynch on lead vocal.. The more rousing hoe down hymn Wake Up My Soul sneaks in too.

It is intoxicating stuff. Richie Furay seems a very balanced human being. He doesn’t seem prone to feeling the slight injustice that rock n roll did to him. He was always third genius in Buffalo Springfield and Poco always came second to The Eagles. Any listen to this anniversary celebration should remind you of what a major force Richie Furay was. It rocks in the best of country ways.