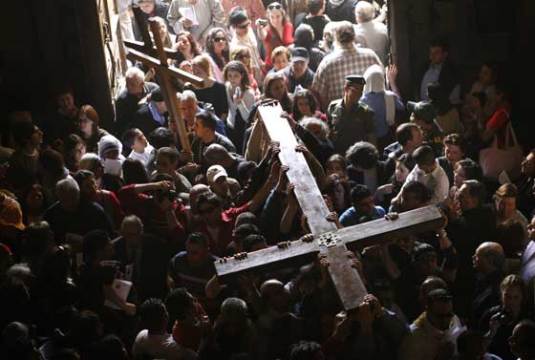 Did you hear the one about the minister who mistook a pub for a sermon illustration?!

Almost 30 years ago, I was leaving my Dublin office with my mate Chris. As we were heading out for lunch, Paddy who did the door for the Keep Fit Class that hired the hall beside the office said, “Out into The Flowing Tide lads”.

Goodness we thought, Paddy has got all philosophical. What a great image of O’Connell street just yards away… a flowing tide.

We laughed over lunch but I decided I could put Paddy’s phrase, Into the Flowing Tide into a poem. Chris conjured a song.

We were comparing notes of said poem and song in the back of a car about a week later. Brian who was driving looked back and said:

- That’s the pub across the road from your office.

We burst out laughing. Paddy wasn’t so philosophical after all! And yet, Chris’s song got written and my poem. I took the Flowing Tide image and set it in Holy Week.

Last week Christians all over the world remembered the death of Jesus. I realised as I wrote my poem that Jesus died out there in the flowing tide of the city among thieves and gamblers and soldiers and scoffers.

The truth is that it these were Jesus people. He talked a lot to the religious people about it being the sick who needed a doctor. Jesus love was always intended to reach way far beyond the church walls.

A couple of years ago I saw a sand sculpture of Jesus on a cross on a Spanish beach. The sand artist had added luminous eyes.

As I marvelled at the art I couldn’t help but be drawn to those eyes. It didn’t seem that anything or anyone could be out of their reach.

And so this week, the week after Holy Week, no one in the flowing tide of humanity is beyond Jesus loving gaze…