PAUL DISTILLED - AN INTERVIEW WITH THE AUTHOR GARY W BURNETT 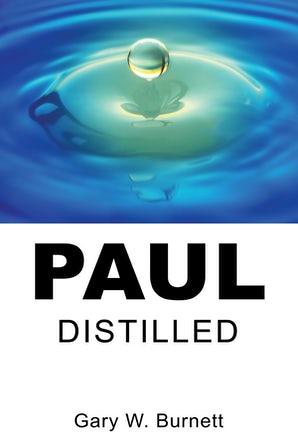 In the first weeks of Lockdown in 2020, Gary Burnett did a wonderful series in Fitzroy on the theology of Paul. He took 10 themes in Paul's letters and gave 10 minutes teaching session on each. Gary's research in into Paul's writing and the social history of the first century was wonderfully illuminating.

A year later and Gary has added a few more themes and put it all down in a book that is launched on March 10th 2021. I had the honour of endorsing the book with these words:

"Gary Burnett has an academic mind, a devotional heart and a cultural perception. This unique blend gives him the ability to take big theological ideas and distill them into short accessible teaching sessions. They are inspirational, insightful and instructional. You will read the text afresh and hear the call to live in challenging ways."

I got a chance to ask Gary a few questions about himself, the book and of course Paul.

When did you start taking theology seriously?

About 30 years ago, after having been a Christian for many years, and thinking I knew my Bible pretty well, I went to a year of evening class study at Belfast Bible College – and realized how little I really did know! That spurred me on to do a theology degree and then I couldn’t get stopped, so I did a PhD. After that I began teaching, mostly in Union College, but also in the Bible College and Stranmillis College

What then drew you particularly to Paul?

The church I grew up in was a great fan of Paul and so I knew Paul’s letters pretty well. But during my studies I discovered there were a great many other approaches to Paul than what I’d grown up with, so it was very intriguing to start to drill down and see if I could get a better handle on him.

Plus, I’d become very interested in the social history of the first century world, and I really appreciated trying to understand Paul within his own context. In the light of what we know – and we know a great deal – about his world, how might we understand what he has to say? And what relevance might that have to our world and our lives?

So, as I approach Paul, I’m always reminded of what John Stott said was the job of preachers – to try and understand the two worlds of the first century and our own, and then to build a bridge between them. And that’s pretty much what I’ve tried to do over many years. But there’s hard work involved!

Paul Distilled started as a teaching series. What was the original inspiration for that?

Well, last Spring the pandemic had hit and the whole world was turned upside down. We went in to lockdown for the first time, and we were aware of a great deal of suffering all round the world because of the havoc caused by the virus. So, I suppose I just wanted to do something positive, to provide a little bit of encouragement and inspiration for people.

So I knew that there was great potential for that in Paul’s letters – something, of course, that I know a little bit about! What he has to say about resurrection, about anxiety, joy, the power of the Holy Spirit and about love seemed to me to be the perfect antidote to the malaise we were all feeling.

As a result, I did this series of ten “Paul in Tens” – little video presentations, taking a theme in Paul and trying to make it engaging and hopeful for everyone, and doing each one in just 10 minutes. And they seemed to go down quite well, so after the videos were completed, I talked to the guys at Wipf and Stock about turning the material into a book and they were enthusiastic. I then set to work to augment and re-arrange the material and turn it into Paul Distilled.

In your introduction you suggest that many people have issues with Paul. Why do you think we ended up with a wrong take on him?

Well, you’ve got to admit, some of the trains of thought in Paul’s letters can be a bit confusing! Even the apostle Peter said that he thought brother Paul’s letters were “hard to understand.” And he lived in the same world as Paul! So perhaps we can be forgiven for getting the wrong end of the stick sometimes.

And then, of course, we have 2,000 years of theology to contend with – much of which is good and helpful, but some of it is a product of its time and its own social setting. So, along the way, Paul has been used to support slavery, despotic regimes and dreadful treatment of women, for example, and that legacy lingers on. But, trying to understand Paul in his own world can be a great help in untangling some of the knots we’ve got ourselves into at times.

Knowing something about the Roman Empire, its religion and its values, for example, can be a great help in seeing that Romans 13 isn’t the only passage in Paul that can guide our attitude to the powers that be. There are other passages where he is really being quite critical of all that Rome stands for.

Your subjects are intriguing. Usually Paul is all about "justification by faith” but though you use a Bob Dylan quote to almost take that as read, you are dealing with poverty, peace-making and justice. Why do we often miss these themes in Paul?

Yes, it’s maybe strange to have a book on Paul which doesn’t cover what most people think of by the term “justification by faith.” And, of course, that is important. But I did want to highlight some of the areas many of us have missed – perhaps by the very concentration there has been on that phrase.

Once you start thinking about what the idea of the “gospel” was to a first century Jew like Paul, then you are immediately into the idea of the expectation of the kingdom of God arriving on earth. And that was his expectation – except now, it all revolved around the person of Jesus the Messiah. His coming, death and resurrection, Paul saw, were the way in which God’s promises to Israel were being realized. And that meant the peaceful world that Isaiah had envisaged; that meant the great reversal of rich and poor that Mary had seen; that meant the new day of justice that Israel’s prophets had looked for was now arriving; and that the transformation of the world was beginning.

So, I think, once you get that clear, and you see that the gospel is not simply “getting saved and going to heaven,” then as you read Paul, you’ll begin to see ideas about peace and love and justice popping up everywhere.

What I really like about Paul’s letters is that in them we can piece together this grand vision that Paul has for seeing the significance of the coming of Christ. Which will culminate in the day of resurrection when God comes to renew the world. But, for Paul, that day of resurrection has already begun – which has enormous implications for our individuals lives, but also for the world. We Jesus-followers are called to anticipate God’s new creation in the present by seeking peace and justice in our church communities and in the wider world.

And then the woman issue. Paul is often seen as against woman. You challenge that assumption.

Sadly, Paul is often seen as restricting the role of women in leadership. With the result some people just give up on him, thinking he is some sort of misogynist. Part of the problem is that there are a couple of verses in his letters that have been magnified out of all proportion. But if we start at the right place – which I argue in the book is Romans 16 – then we begin to get a much different understanding of Paul. One where he clearly works with and appreciates a whole range of women leaders in the early churches. So, the evidence from the New Testament really does not support restricting women in leadership. Far from doing that, actually, Paul supports women in church leadership!

How do you hope people might use the book?

I hope that the book is a good starter for people. That it gives them a way into Paul and opens up their thinking about the way that he thought about the gospel, about Jesus, about the world and the potential for transformation. That it might whet their appetite to study and think more about Paul’s letters.

But also, I’ve included a set of questions at the end of each chapter, so that the book could be used in a church or home group setting. Where, perhaps, people could read a chapter and then come together to chat about some of the issues it has raised.

But again, like the Paul in Ten videos, I hope people will find this little book interesting, challenging and inspiring.