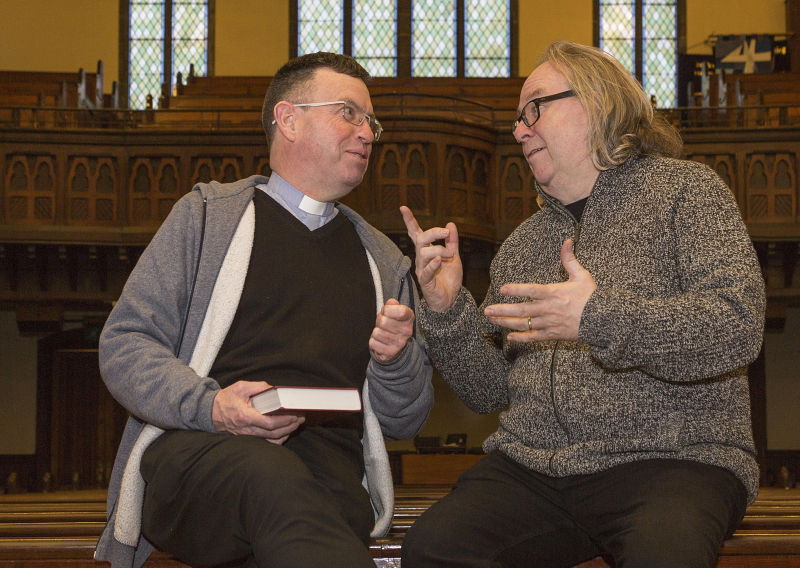 (I am particularly tickled with this article. I wrote it for Freckle magazine about a year ago and it was published just a few weeks ago. Yes, you read it right. I wrote it as an interview. Out of all the talks and interviews that Martin and I have done together I think it is very accurate... for those seeing 4 Corners Festival all over social media, here is how it all came about and developed)

STEVE: The 4 Corners Festival might be the story of two people from across our divided community becoming friends and then creating ways to make more such friendships.

MARTIN: In 2011 I wanted to run an Irish Language class that both Protestants and Catholics could attend which would help depoliticise the language. Linda Ervine is doing this wonderfully in the Turas project.

I was Parish Priest in Lenadoon and I couldn’t see Protestants coming into Lenadoon to learn Irish. I knew that Fitzroy had an Irish Language church service (An Tor ar Lasadh - the Burning Bush) and therefore thought that Steve might be open to having the classes there. Catholics would have no problem going to a Presbyterian Church for Irish classes given the role Presbyterians played to save the language.

STEVE: I was absolutely up for the idea. My wife’s cousin was an Irish speaker and actually became one of the teachers!

MARTIN: We met for a coffee to talk about how the whole thing would work. Steve gave me a key to get into the halls in Fitzroy. Keys have great significance in Catholic tradition and I was very moved by this.

STEVE: That coffee was a life changer for me. I remember coming out of the cafe and turning towards Fitzroy. As I walked the few hundred yards to my office I can remember thinking that something had begun. That our friendship was going to go somewhere and do something. I had no idea what.

MARTIN: I went home thinking that, if I could have, I would have bottled the conversation. There was a real energy to it.

STEVE: We continued to meet. Martin invited me to read a poem at an ecumenical service called In Joyful Hope up in Lenadoon. The poem I read was called Prayer For The 4 Corners Of Belfast.

MARTIN: The following June I was asked by Paul Gallagher if I would celebrate Mass on 21st June, the Day of Reflection and the ‘longest day’ in the year when those lost or injured during the Troubles are remembered.

I asked Paul if I could do a joint service with Steve instead of the Mass and that is what we did.

STEVE: In Fitzroy we do a series called The Gospel According To… The very gifted singers and players in Fitzroy perform songs that I link with spiritual thoughts on the songs.

I was keen to do one based on the songs of Christy Moore. Presbyterians singing rebel songs like Irish Ways and Irish Laws. So, we did it in Lenadoon!

MARTIN: Then there was another cup of coffee. They are dangerous in our story! Paul Gallagher had arranged to show us an Art Exhibition of work by people from VAST - Victims and Survivors Trust (VAST). He forgot. We went for coffee.

STEVE: Over that coffee I shared with Martin my journey up to see him in Lenadoon. I described the roundabout on the Andersonstown Road as like going through CS Lewis’s Narnia Wardrobe. Here was west Belfast, like a whole new city that I’d never seen. Schools, shops, sports stadiums, forest parks and ice cream parlours!

MARTIN: I agreed with Steve and told him about a trip over to the Eastside Arts Festival to an event in Ballyhackamore Community Library - I had no idea where it was and got lost trying to find it. This was OUR city yet there were parts of it we didn’t know.

STEVE: So we started talking about a Festival where we could perhaps encourage people out of their corner and go somewhere they hadn’t been.

MARTIN: We jotted down names of six or seven like minded people who might share our idea and called a meeting in the Irish School of Ecumenics, which in those days was on the Antrim Road.

STEVE: Looking back it was a mad idea. None of the two of us have a PhD in Festivals.

MARTIN: None of there two of us have a PhDs in anything!

STEVE: We brought that group of people together in October and by January 2013 we had our first festival.

I love a quotation that someone sent Bob Geldof when he was doing Live Aid. It is from a mountaineer called WH Murray and says that once we commit, “A whole stream of events issues from the decision, raising in one’s favour all manner of unforeseen incidents, meetings and material assistance, which no man could have dreamt could have come his way.” The 4 Corners Festival has proven that to be true. Mayors, politicians, artists and preachers all gave us of their time and gifting.

STEVE: There have been some amazing moments. When we repeated The Gospel According to Christy Moore at Clonard Monastery one of the singers sang the Bobby Sands song Back Home In Derry. Introducing it he suggested that this should sound like a lullaby. Afterwards a man approached him and sai that he was in the cell beside Bobby Sands and that it was indeed a lullaby. The singer then told the former IRA prisoner that he had lost his Grandfather in the Kingsmills Massacre. That opened up quite a conversation. Where else is that happening.

MARTIN: We have tried to give people a chance to tell their stories. Alan McBride has shared about losing his wife in the Shankill bomb and Stephen Travers has shared about the Miami Showband Massacre. What we find at such events is that people in the audience then feel that they want to share their own story. We are grateful to Alan who now works for WAVE for helping us do that sensitively.

STEVE: We find that every year more people come along and the impact of the Festival widens. People are exploring the city. From across the corners friendships are being made. Through art and music, poetry, drama and so many other ways public conversations are being had about peace and forgiveness and imagination and grace.

MARTIN: We live in Belfast in a constant state of uncertainty. Our first Festival was at the height of the flags protest. Another was a week after Martin McGuinness’s resignation brought down Stormont. This year’s festival started on Brexit Day. Into all of this we try to breathe just a little hope. We hold to an idea that the prophet Jeremiah had in the Old Testament. He told the people who were in exile to pray for the peace and prosperity of the city they were in because everybody would benefit from that. That is what 4 Corners Festival is trying to do.