IF ONLY WE ARE BRAVE ENOUGH TO... - AMANDA GORMAN'S POEM 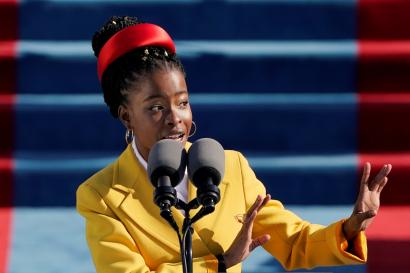 I am writing two articles for different papers today and I was struggling. Then the amazing Amanda Gorman reached in to all our lives and I have a torrent of possibilities. Someone suggested I do a sermon series. I am conjuring The Gospel According To... Amanda Gorman!

Wasn’t she amazing? The performance itself was so poised and powerful and then the words. Words of hope and healing. Words of the common good and the possibilities therein. “… isn’t broken/Just unfinished”. Nice!

America has had a few tough weeks, many would say years. I remember a conversation in Ohio a year or two before Donald Trump where some were fearing violence, the divisions of red and blue and black and white were so tense.

I think it would be wrong if Amanda Gorman’s poem was so attached to Joe Biden that the 70 million who voted for Donald Trump missed it. Light from any quarter the Reformers advised us. There was lots of light in Amanda Gorman’s poem and for ALL of America to miss that, every nook and corner (and indeed the rest of us) would be very sad.

Tears rolled down my cheeks when she found herself in her own poem.

We the successors of a country and a time

Where a skinny Black girl

descended from slaves and raised by a single mother

can dream of becoming president

only to find herself reciting for one

I left watching the inauguration just about the end of her poem to speak at a Public Meeting in support of the Belfast Multi-Cultural Association. I found myself unrehearsed quoting her almost immediately. Surely that made me one of the first people to quote the poem in a speech. I’ll claim it anyway! Apparently in doing so I quoted from Hamilton. I had no idea but it made me cool with my daughters!

Amanda had used one of my go to verses from the prophets. To hear her quote Micah 4:4 was like my team scoring a goal in a Cup Final.

It is now twenty years since I started taking teams to Africa and Micah 4:4 has become very precious in my theologising of the work we have done in Cape Town and Arua. That I had to quote it in South Belfast brought some reality to the state of our world but it seemed appropriate. Here is God’s will for every human being. Shelter. Security. Vocation. Shalom. I believe it is what Jesus calls me to bring to the world.

Which leads me to the words that I am using in the articles I am writing. Her ending. Oh the ending.

“There is always light

If only we are brave enough to see it

If only we are brave enough to be it.”

Jesus said he was the Light of the World. We need to see it. It takes courage. Even more courage to respond when Jesus looks at us and says “You are the light of the world.”

Wow! I’m in and I’m not even American!