YOU ARE WHAT YOU LOVE... NOT WHAT YOU BELIEVE 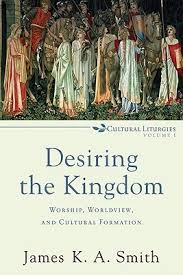 My good friend and former colleague at Queen’s Chaplaincy, Father Gary Toman, often speaks about having a grá for something. It is the Irish word for love but it takes on a guttural description for that passion for something that drives you and your life.

It is that grá that James K A Smith, Professor of Philosophy at Calvin University, is talking about in his incredibly insightful book Desiring The Kingdom. Smith followed that one up with the more direct You Are What You Love. The general premise is that we are not what we think but by what we love. What we have a grá for will be what shapes our lives.

So, I asked, is Jamie right?  Do slogans like "God and Ulster" and "God and Ireland" suggest that our love for country or flags could get in the way of our beliefs about God. A really articulate theology could go by the wayside when a deep grá for political allegiance and flags are what drives our actions.

So, my next question, was how Smith’s theories connect with the Scriptures. It happened that as I was reading Desiring The Kingdombook I was reaching, in my preaching series, Mark 12 where Jesus declares the greatest commandments and speaks of love for God as the Jews would have been familiar with in the Shema from Deuteronomy 6 and then adds from Leviticus 19, an amazing chapter that spells out the love for neighbour.

It is these two commandments that would define Jesus followers and he actually never mentions cognitive understanding of God but always emphasises love. Jesus is encouraging the grá that will transform his followers. In John 14 he tells the disciples that if they love him they will obey his commandments. The grá is what drives the Jesus community.

Smith is not using Irish words or applying his theories to Ireland. His argument centres on 21st century America. He uses the Shopping Mall, the religious nature of which he paints provocatively over a few poetically crafted pages, and the sport’s stadium. He argues very compellingly how even the Christian who thinks he/she has his/her brain switched on and is what he/she think cognitively can be subtly caught in allegiances that would quite simply have been described as idols in the Old Testament.

The powerful gut stirring symbolism of the American national anthem at sporting events leading to a belief that God is American receives Smith's strongest ire! That we could be doctrinally well thought through but miss the hold that consumerism has on our well being is also well pointed out.

Once we are shaped, Smith goes on, we then aim our loves at what we believe to be human flourishing. This end result will again not be so much decided on by cognitive doctrinal statements but the social imaginary of what we are steeped in at mall, sports stadium and wherever else we inhabit.

Christian thinking over the past decades has targeted the mind with great books and lectures and conferences. Smith is not saying that we replace these, or the book itself would be dropped from the publisher’s catalogue, but he is saying we have missed the more potent spiritual formatives; the stories, movies, songs and worship that are pedagogies of the kardia.

Smith is suggesting that the liturgy of worship takes on an enormously important role in challenging the social imaginary of the mall and sports stadium in order that we recognise the Kingdom of God as what human flourishing is really about and our hearts get aimed at the right loves to bring that kingdom around.

Smith has articulated what I have been thinking for years that this generation in particular are more subjective than objective. Modernity had us lost in a phase where that might not have been so but the “word becoming flesh” was God’s best revelation of truth and that was aimed at the subjective gut not the intellectual mind.

Desiring The Kingdom and You Are What You Love that followed it have all kinds of things to say into the last days of Trump and the first days of Biden. If the States are to unite again. If a nation divided seemingly so venomously is to find a path towards healing then James K A Smith throws up perhaps the key question. Who are we? What we believe? Or what we love?

Smith's thesis has to be heard in Ireland too and in post Brexit Britain. Jamie's profound thought and his meticulous unpacking of it has opened up all kinds of leads for me in how to pastor a Church, lead worship, form the Christian core of the young, develop the spiritual maturity of the older, how to evangelise and teach. Before all that I am reassessing the habits of my own life to reconsider what feeds my social imaginary and where the idols of our time might be subtly having their way. 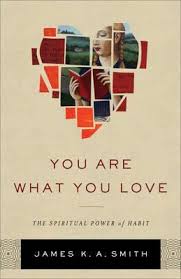 Posted at 11:50 AM in BIBLICAL SURMISING - CARESS AND COLLIDE, BOOK REVIEWS | Permalink | Comments (0)