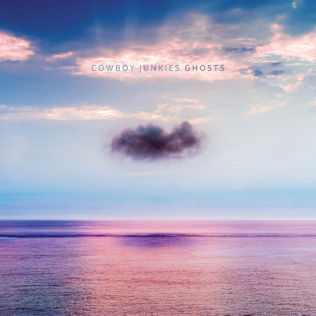 I am always asked about my favourite album cover and now I have an answer. Canada’s Cowboy Junkies brought an album out in March with this beauty.

It actually expresses all of the band’s catalogue. The almost gentle blend of pastoral colours, rich but not loud.

If it covers the band’s 35 years in general, it pictorially fits Ghosts in particular. Songs like Desire Lines, Breathing and Grace Descends get a perfect visual accompaniment.

I was captivated once again with Cowboy Junkies’ extraordinary album called All That Reckoning in 2018. After a number of years when they hadn’t rocked my soul they reached in deep with a record of stunning playing and poignant songs both personal and political.

I was surprised that I had somehow missed a follow up EP Ghosts. It seems that shortly after All That Reckoning Barbara Timmins, the mother of three Junkies Michael, Margo, and Peter, died.

Ghosts has the dissonance and distortion of grief. It also has the sacredness and the mysterious grace. Back to that cover. The dark cloud, the filament of golden light breaking through.

This band arrived with the classic Trinity Sessions record. Three decades later they have nothing to prove with their virtuoso musicianship, beautiful songwriting and Margo’s voice lazy and sublime. They don’t have to but boy they do.