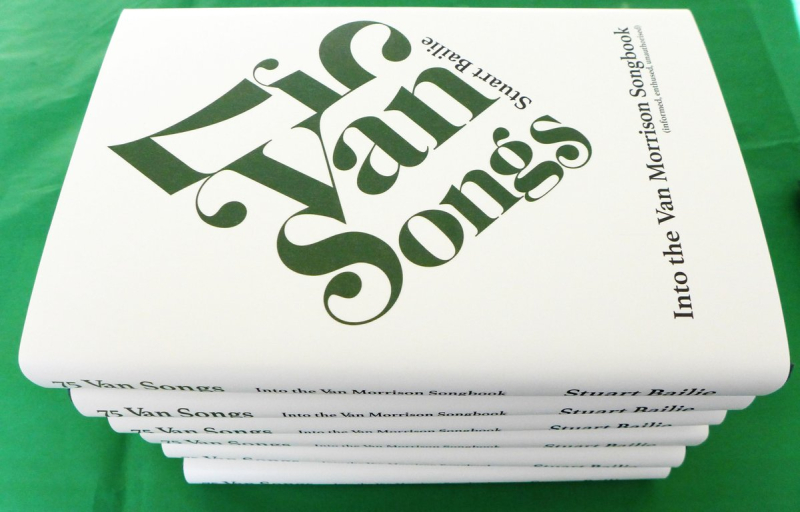 Imagine if a small city in a small part of the UK or Ireland (depending on the lottery of your birth) not only produced one of the icons of the rock genre but also a world class journalist who could write about it.

Stuart Bailie was assistant editor of NME at the height of Brit-pop 90s and has been accused of starting the Oasis - Blur war by Noel Gallagher! He has written in every rock magazine worth reading,  as well as books about Thin Lizzy and the Northern Irish Troubles, even sleeve notes for U2.

One of the revelations of 75 Van Songs is that none of the above would have happened had it not been for his landlady while he was picking fruit in the south of France in 1983 making him listen to Van Morrison’s Madame George on a cassette in the kitchen.

It was a conversion moment of sorts for Bailie. He writes in the Introduction “The songs of Van Morrison have given me decades of joy and fascination. They have  been companions through many life changes, instances of hurt and homesickness, romance and reflection.”

Part of me asks why it has taken so long for Stuart to finally write a book on Morrison. Another part of me thinks it might be better for the fact that it has been 37 years in the incubation. Almost four decades of Bailie listening, meditating and surmising on all of these songs.

And in some ways that is what we get. It is almost like a book of spiritual meditations. Janice and I took the opportunity in Kickstarter to be patrons of the book and were asked for our favourite song. Our song is Someone Like You which I didn’t even expect to be in the book.

Yet, there it is and with “our” song Stuart does what every page of the book does. It is like he pries the song open and helps us hear, see and feel more:

“Someone Like You is the voice of a pilgrim who has done his searching and craves the illumination. He submits to us that, finally, he can see the light, but there’s no elation in his voice. It’s a quiet consolation, although when he talks of the best days ahead of him, it figures that the load has been lifted.”

It is beautiful and spiritual. Each entry is like a sacred manuscript, like a cross between Leonard Cohen’s Book Of Longing and Nick Hornby’s 31 Songs with a wee piece of John O’Donohue sprinkled in. You could do worse in your day than meditate on these reflections, listening to the song and taking a few minutes for quiet after.

Of course Stuart Bailie’s particular strength as well as his gift of writing is that he knows the city of Van Morrison. If anyone from wherever in the world wants to find the place of Van Morrison’s inspiration then Bailie takes us to the streets, churches, shipyards, windowsills and chip shops.

The book ends in an other worldly way fitting to the book and the work of Van Morrison. By seeming serendipity Bailie gets connected with the son of the man who owned Davy’s Chipper on the Beersbridge Road as featured in Sense Of Wonder. A photograph arrives of the Castlereagh Road in 1952. Stuart’s keen eye finds so many Morrison references in just one shot.

I have waited a long time for Stuart Bailie to write a book about Van Morrison. It was worth the wait. Everything I hoped for… and a lot of spiritual insights beyond!

You can purchase 75 Van Songs in No Alibis Book Shop on Botanic Avenue, Belfast or on line at https://www.musicglue.com/trouble-songs/products/75-van-songs