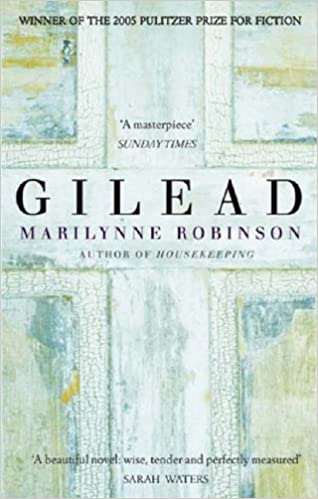 Since I discovered Gilead in the summer of 2009 its writer Marilynne Robinson seems to have been everywhere. That even includes Fitzroy where I got to greet welcome her to the book launch of my predecessor Rev Dr Ken Newell’s memoir Captured By A Vision.

Friends have published Doctorates, Masters thesis and other academic papers on her writing. She has become a strong voice in the public conversation of today’s fragmented and fractious America. She is intelligent and articulate. Even more exciting is that at the core of all she thinks, says and more importantly writes is a theological core.

Some might think that the story of a dynasty of minsters might fit too obviously into my reading schedule but quite the reverse.  I try to avoid anything that smacks of my job for my holiday reading. It is a holiday!

For me to read about ministers in our Ballycastle hideaway, the writing would need to be something special!  Well Marilynne Robinson is something special.  When Bryan Appleyard’s back cover endorsement calls her “one of the greatest living novelists” he is not exaggerating. Pulitzer and Orange prizes (for Gilead and the follow up Home respectively) back up his assessment.

Robinson writes with poetic prose that captures stunning images and with deep insight into the intricacies of the human psyche. More than that she goes to deep soul and asks her questions of love, forgiveness, loyalty, sin and redemption from a specifically Christian context, leaning at times on the Calvinistic; portraying all of that in its better hues!

The book is written in the form of a very, very long letter from an ageing minister to a very young son of a second late marriage, to a much younger woman, but ends up as the journaling of a tough relationship between the narrator Rev James Ames and Jack Boughton his best mate another minister’s son.

In the midst of his wider life story and this more specific scenario you get a liberal sprinkling of spiritual nuggets that reveals that theological interest that I mentioned earlier.

At one point she writes, through old Rev. Ames, “This is an interesting planet. It deserves all the attention you can give it.”  It is the attention that Robinson gives that planet that brings a new vitality, indeed transcendence to things that become too familiar, losing their sacredness. Robinson’s intrigue and fascination with the human being is obvious in everything she does

For me work did sneak in. Gilead elevated the familiar in our church liturgy and sacraments. She described baptism as “sacredness under my hand”. There's the preciousness of the human being again.

Even more, the benediction. For too long that had become like the credits scrolling at the end of a movie. You didn’t even need to stay until the end. Many new churches have jettisoned it as a result. Ms Robinson gives it back all of its potency - “it was an honour to bless him.”  That privilege of blessing each other has become a vital part of our Sunday in Fitzroy.

In the end the words, “Wherever you turn your eyes the world can shine like transfiguration.  You don’t have to bring a thing to it except a willingness to see,” sum it up.  Gilead refocused my eyes and strengthened the ardour of my willingness. It was a joy to read and its benefits go on.