CRAIG BROWN - ONE TWO THREE FOUR: THE BEATLES IN TIME 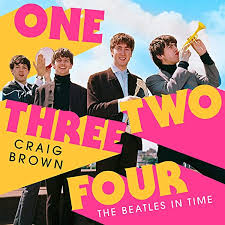 I have read the good, the bad and the ugly of Beatles books. If we include individual blogs it is probably well over 100. I rarely review the bad ones. I concluded that Craig Brown’s deserved a review.

Brown writes in his own signature kaleidoscopic way that he used in his last prize winning book Ma'am Darling: 99 Glimpses of Princess Margaret. It is a quirky lay out. To prove the point the last chapter is a chapter about Beatles’ manager Brian Epstein and begins with his death and goes backwards so that the book ends with his first appearance at The Cavern in 1961.

So, we get a smorgasbord of 150 chapters. At times bizarre. Funny. Frivolous. Serious. Flighty. Shifting subjects and places.

Usually, I like to hear about the songs. Craig doesn’t concentrate so much on that though the insights into Hey Jude and particularly I am the Walrus were helpful.

Where Brown is strongest is writing about the people. The subtitle The Beatles In Their Time is more about the people around them in their time. Other singers and artists and celebrities, a range of fans and even tour guides from today.

Brown does with some of this supporting cast something no one else has. At least in my reading. He brings some of them alive. They stop being names in the story. They become human with feelings and joys and mainly hurts.

Pete Best was no longer someone who played the drums before Ringo. In Brown’s writing I started to get inside Best’s story. I started to feel for him and to sense not only his disappointment but what must have been nothing more than utter betrayal. For a few pages The Beatles came down from their pedestal as cold and heartless. It is not the best part of their story. I was a little angry with them. I wondered how Paul feels looking back at what he did.

If we stay with the drummers I realised how almost traumatic his few days with the biggest band on the planet was. Why they made him part of the press and photographs is a little mystifying and it seems that he suffered for it. I was suddenly trying to wonder how I would have coped with such a bizarre incident in my life.

Then there was Cliff. At the beginning of 1962 Cliff Richard had no competition. A year later and he had been eclipsed from a planet that wasn’t in his universe. Even Elvis felt the Beatles’ effect. As he celebrates his 80th birthday just a few weeks after John Lennon's we should commend the Peter Pan of British pop for surviving that Beatlemania onslaught. I am only glad that as Cliff plugs his new autobiography The Dreamer he is using a John Lennon quote “Before Cliff Richard and the Shadows, there was nothing worth listening to in British music.” They who out-cooled him are giving him his cool back some 60 years later!

Finally Brian Epstein. The man who made it all happen is another sad story in the tale. Brown gets us inside the mind and soul of the businessman who knew nothing about rock n roll and yet honed these four unruly boys into musical icons.

Craig Brown doesn't come to his work with the same full hard drive of a Steve Turner or Ray Connolly. Yet, overall the short snappy chapters always allowed something to regain my attention quickly when the interest wained. I do recommend it.